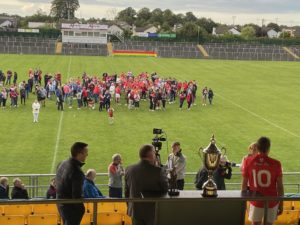 COLM Hulton came off the bench to score four late points and put the seal on a win for Éire Óg that crowns them champions of Carlow for the 30th time in their illustrious history.

It also completes a first four-in-a-row for the club since their brilliant team of the early to mid 90s and on this showing, they will start the 2021 version of this Championship in just a few weeks as overwhelming favourites.

Having defeated Éire Óg in the Division 1 Final just a couple of weeks back, Rathvilly started like a side full of confidence and two magnificent long range scores by Brendan Murphy helped them into a 0-3 to 0-1 lead after eight minutes.

However, gradually the tide began to turn and Éire Óg got on top. Darragh O’Brien pulled a lot of the strings for Joe Murphy’s team and they got back on level terms, before Brian Murphy sent Rathvilly into the water break leading 0-4 to 0-3.

That was the only score from a Rathvilly forward in the first half and they failed to score at all during the second quarter.

Éire Óg led 0-6 to 0-4 at half time and then scored the first three points after the restart to really take a strangehold of the game.

Darragh Murphy endured a difficult evening on frees but he landed his first of game in the 39th minute before Jordan Morrissey and Hulton answered back to push Éire Óg six points clear.

With the game slipping away from them, Rathvilly had one last burst at it when Brendan Murphy scored the first of three in a row to cut the lead back to just three points with four minutes left on the clock.

However, Hulton, who was only introduced into the game in the 45th  minute, stood up to be the hero by scoring the next three points of the game.

Murphy and Cormac Mullins swapped points in injury time but by then there was no doubt that Sean Gannon would be the captain to lift the trophy after the final whistle. The celebrations won’t be long ended before Éire Óg turn their attentions to the 2021 version of this Championship and attempt to emulate that team of the 90s by lifting a fifth successive title.

Éire Óg’s Mark Furey was named as the man of the match.

See Tuesday’s paper for extensive coverage of this final.