CARLOW’S Lauren Dwyer recently celebrated her 150th appearance for Wexford Youths. She said it it was a special moment when she found out. “I didn’t actually realise it until after the game, I was told that it was my 150th game. It’s crazy that I got that far considering I missed a season and a half when I moved to Raheny/Shels, it’s absolutely phenomenal to still have reached 150 caps for Wexford.”

At just 24, Dwyer is one of the youngest members of the team but one of the most senior too, having been at the club since she was 15. “I was training with the club just before my 16th birthday and then when I turned 16, I signed on the dotted line. I signed for them at a time when I was still doing athletics as well and I got called into the Irish camp when I was 15/16 too. I was told that I had to choose one or the other and I liked the idea of soccer being a team sport. I was at St. Joseph’s growing up, I played with the boys until Under 12 and then they brought in a rule saying you can’t play with the boys at that age. So my mam and Bernard Mullen set up a girls’ team that was basically just me and my friends so that we could play soccer. We played in the Kilkenny League because there was no league in Carlow. I then went on to play for a South Eastern team which is when I got approached by John Flood whether I wanted to play for Wexford.” 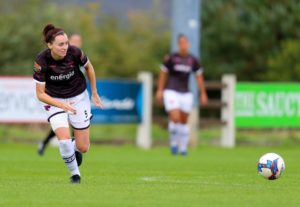 She recounts her early days at the club. “I came in in the second year of the club because I was too young to play when they first started. It was tough because I didn’t know anyone and from the get go, you’re up against women, it is tough but you adapt when you have a great group of girls around you encouraging you. It’s tough for anyone starting out at a young age trying to get into a women’s team, it’s very physical and there’s a lot expected of you. You just have to put your head down and work hard. We used to get hammered all the time, we used to get beaten 7-0, 5-0. It was tough but when you look at how far we’ve come to become the most successful women’s team in the country. When you look in from the outside and where we started and getting beat badly to where we are today is just phenomenal. It just shows the resilience of the team to keep going even in the toughest times. We were a brand new team, we didn’t know each other at all and once players aren’t coming and going, you know you have the same core squad. We just kept grinding away, kept training week in, week out and as players you start to improve and as a team you start to improve. Things were tough and that brought in a resilience into the team. We started getting draws against teams and then winning and it gradually got better.”

After a couple of seasons, she made the move away from Ferrycarrig Park up the M9 to Raheny/Shels. Our management was changing and I was up and down to Dublin a lot with the Irish Under 17s and Under 19s and I was playing with girls who were from Raheny and I was always up there and I thought that I needed a new challenge. There was no bad blood, I explained everything. I signed for Raheny and I think I was there for a year and a half and then my mam passed away in 2014. She was the one who always brought me up and down with my dad and it was tough to get back into it when someone who used to be with you all the time going up and down wasn’t there so I took a step back and I left Raheny. After a while, I was missing it and I texted Kylie [Murphy] and said I want to get back playing and she got the manager to ring me and he said yeah no hassle at all, just come up whenever you’re ready. When something like that happens, you have to learn how to deal with it and how to cope with it and the way I coped with it was by going back to what I knew and what I was familiar with. I needed something familiar and I didn’t need that drive up and down, especially with mam not being there, I just needed to get back to some sort of state of normality.

“I went back then and we actually had the playoff in Tallaght and it was against Shels, my whole family was there. It was a really special occasion. Playing against your old club is always nerve wracking, even when I played against Wexford when I left I was nervous, you don’t know how to react, but you just have to get on with it. After the game though, they’re always congratulating you and saying well done, there’s no hard feelings. When you leave a club, you always wonder if it’s ever going to happen for you, whether you’ll ever win a league or a trophy. The year I left Wexford, I ended up going to the Champions League with Raheny. We qualified for the last 32 which was phenomenal, absolutely phenomenal. We played Bristol home and away and sadly lost that. Being there with Wexford then and hosting it in Wexford, it’s incredible to be there. You see the standard that you need to reach, you’re playing semi pro and professional teams, it’s an absolutely incredible setup. I’ve played in three now and hopefully I’ll be back.”

Lauren says her game has improved massively over her time at Wexford but that she isn’t the finished article yet and has big ambitions. “When I arrived at 16, I could barely control a ball, you’re not used to playing all the time and having these standards you need to reach. In terms of my progression, I think I’ve done well, I still think I have a long way to go though if I want to make the senior Irish team. But I think my performances so far this season have been good, they’ve been consistent whereas in previous seasons they maybe haven’t been as consistent as well I should.”

She credits her changing jobs which helps her be around more as she tries to push for an international place. She did represent her country at the World University Games and did get a call up for the senior team a few years ago, early on in Vera Pauw’s tenure but had to settle for a place on the bench and not getting on. “I think this season though I’ve changed my work so I’m in a new place now, I’m making every training, whereas previously I might have missed a training session a week which doesn’t help your own progression. I’ve seen a massive difference in my own self this season in that I’m able to make every training and every game. Hopefully I’m heading in the right direction, I think sometimes you need to set yourself a standard and push past that. Hopefully in the not too distant future I’ll be there, thereabouts but if it doesn’t happen, it doesn’t happen, I’m not going to dwell on it but obviously it’s a fantastic opportunity that I hope I get to experience. I think when you go through so much at such a young age, you realise there’s more to life but hopefully, I’d love for it to happen. Hopefully I’ll get there someday.”

The question of Lauren’s future is an intriguing question and one she said that gets asked quite a lot. Right now, she’s happy at Ferrycarrig but if the opportunity came knocking to go abroad, she said that it would be something she’d have to think about with different factors to consider. She hinted that due to soccer life being so short, that she only has 10/11 years left at her peak, that while she is happy at Wexford at the moment that she may look at options abroad to see if it may help her reach her goal of becoming an Irish international. It’s fair to say the future is bright for the local star and she is certainly determined and dedicated to her goals and who knows, perhaps in the next couple of years, we can say Carlow is home to an Irish international soccer player. For now though, we’ll have to settle with watching her keep clean sheets for Wexford Youths.