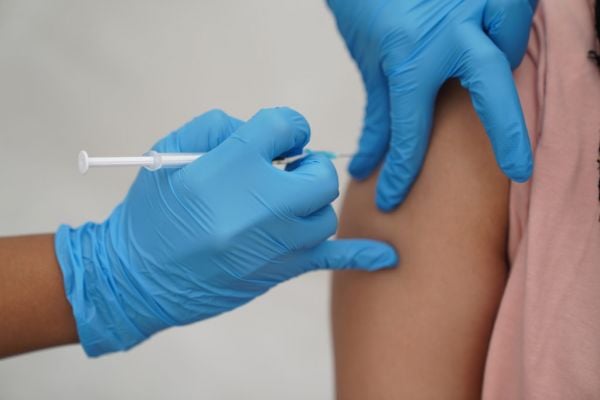 An estimated 65,000 children aged 12-15 have registered for their Covid-19 vaccine within 24 hours of the portal opening.

Vaccinations of children and teenagers will begin this weekend, with more than 23 per cent of those aged 12-15 registered to receive the jab.

Great milestones today on the vaccination programme. 0ver 80% of adults now fully vaccinated & almost 90% partially. 65,000 12-15 year olds have registered & many of these will be administered this weekend. Ireland is right be proud the programme & the public’s response @HSELive

“Overall it does reflect a very strong point of the national vaccination programme.

“It represents a very strong point of the programme that we’re at, and specifically for 12 to 15-year-olds.

“Many of those who will have registered yesterday will have already received appointments for this weekend, I’m very happy to say that.

“Our teams and vaccination centres are strongly focused to try and get this job done rapidly and quickly.”

There are, however, concerns among the rising number of people in hospital with the virus.

There are currently 207 people in hospital and 37 of those are in ICU.

Mr Reid said there has been a steady increase in the number of people admitted to hospital in recent weeks.

“We’ve all seen there’s a lag effect between high levels of case numbers and hospitalisations, and we are kind of following that trend again,” Mr Reid added.

“As case numbers have risen over the previous two or three weeks, we equally have seen hospitalisations follow.

“Looking forward, a lot depends on what the trajectory looks like for next few weeks. I think we can all take very strong confidence from the vaccination programme of where we at and the expected benefits.”

He said that while it hasn’t reached previous high levels of 400 patients, it could still reach high numbers, with further admissions expected throughout August and in September.

Mr Reid also said there is a “hugely compelling argument” for distributing vaccines to the world’s developing countries.

He rejected suggestions that Ireland is hoarding vaccines, adding that it is administering all the vaccines it is currently receiving.

#COVID19 is still spreading.
Remember to:
– wash your hands
– keep your distance & avoid crowded places
– cover coughs or sneezes
– wear a face covering
– let fresh air into your home by opening windows, doors and air vents as much as possible

We can do this. #ForUsAll pic.twitter.com/eix2yRhfwR

He added that as the vaccine programme moves forward, the Government will decide on how they are used and distributed.

“We haven’t been hoarding vaccines, what we have been doing is, quite efficiently, on receipt of vaccines is storage, distribution, administration, that’s what we were continuing to do,” Mr Reid added.

“So we’re still on a very efficient distribution and administration of vaccines.

“Ultimately, as we move forward, the government have committed to almost 78 million vaccines through the EU process and again, there are decisions for government for the future as well.”