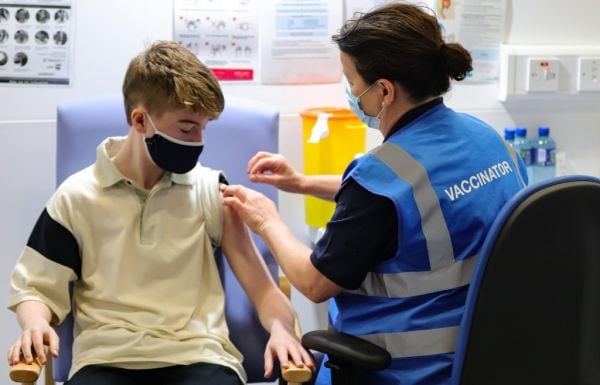 Around 30,000 children aged 12 to 15 received Covid-19 vaccines in the first two days of the rollout to that age group in Ireland.

Health Service Executive chief executive Paul Reid said 90,000 children in the cohort had been registered for a vaccine appointment by early Sunday afternoon.

Some vaccines centres began to give jabs to 12 to 15-year-olds on Friday but the main rollout began in earnest on Saturday.

The children, who need the consent of a parent or guardian to get vaccinated, are receiving Pfizer or Moderna jabs.

There are around 280,000 children in that age group in Ireland.

Mr Reid said he was not concerned at the uptake level so far and expected there to be continuous registrations over the coming two weeks ahead of the new school term.

The HSE boss also confirmed that children who are fully vaccinated would not have to isolate if they were identified as a close contact of a positive case within the school environment, as long as they were not displaying symptoms.

Mr Reid said those children who had not been vaccinated would still have to isolate.

“We now have almost 90,000 12 to 15-year-olds who are registered on the portal or may have just received it directly from a GP,” he told RTÉ Radio One on Sunday.

“There’s 30,000 in total vaccines administered to 12 to 15-year-olds since we commenced on Friday in some locations, but primarily yesterday.”

He said the isolation policy for schools was aligned with public health advice for the population as a whole.

“You are more exposed if you are not fully vaccinated and you are highly more protected if you are vaccinated, so it’s really aligned with the public health advice that we’ve put in place throughout,” he said.

The HSE boss also expressed concern at rising Covid-19 case numbers in Ireland. The 2,074 confirmed cases reported on Saturday was the first time since January that the daily total had exceeded 2,000.

Mr Reid said hospital numbers had increased six-fold in six weeks, with 243 patients in hospital on Sunday and 43 in ICU.

However, he said the figures had to be viewed in context and stressed that the vaccination programme was having a significant impact.

“We do have a concern with the rising numbers, rising everyday case numbers.

“We’re now at over 2,000 and equally just seeing some rise in case numbers across all ages and across the whole country.”

Mr Reid was also asked about inconsistencies around partner access at different maternity hospitals in Ireland.

He said he had asked senior officials, including chief medical officer Dr Tony Holohan, to meet with patient advisory groups and advocates next week in an attempt to address some of the issues.

“We do want to find a shared pathway out of this,” he said.

Earlier, Mr Reid said Ireland’s vaccine programme would become increasingly reliant on the mRNA vaccines Pfizer and Moderna and would be moving away from the AstraZeneca and Johnson & Johnson jabs.

“At the EU-level, the steering board has recommended each country make a decision to suspend the further delivery of Johnson & Johnson or indeed AstraZeneca.

“And that’s the approach that we will likely be taking.”

Mr Reid highlighted that the recent vaccine supply deal with Romania would see 700,000 mRNA vaccines delivered to Ireland in the coming weeks.