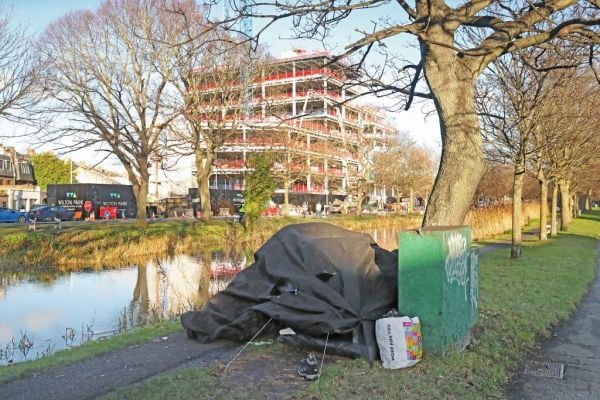 Sinn Féin’s Eoin O Broin has called on the Dublin City Council chief executive to withdraw comments he made in which he suggested that homeless tents should be removed from the capital.

In an interview on Sunday, Dublin City Council CEO Owen Keegan said: “We don’t think people should be allowed to sleep in tents when there’s an abundance of supervised hostels.”

“There’s a massive pressure to allow people to camp on the streets. And that adds to that perception of an edginess about the city,” he told Newstalk.

“There are very good reasons why people don’t go into emergency accommodation,” he said.

“People who experience mental health, people who have had negative experiences in those threshold, dorm-style or shared hostels. They don’t feel comfortable.”

He said that the solution was to end this type of homeless accommodation and move people out of homelessness quicker.

“People feel like they have no other choice. That’s not a criticism of the providers of the emergency accommodation, it’s a criticism of Government policy.”

Mr Ó Broin questioned again the the delay in publishing the Government’s “Housing for All” plan.

The new plan was scheduled to be launched in July, but was delayed.

Mr Ó Broin said there was “disorientation, disagreement and confusion” between Fine Gael and Fianna Fáil over housing policy.

“They’re going to announce the plan, it’ll then take six, eight, nine months before that gets up in action. Micheál Martin will no longer be taoiseach by the time the Fianna Fáil housing plan is even in action,” he said.