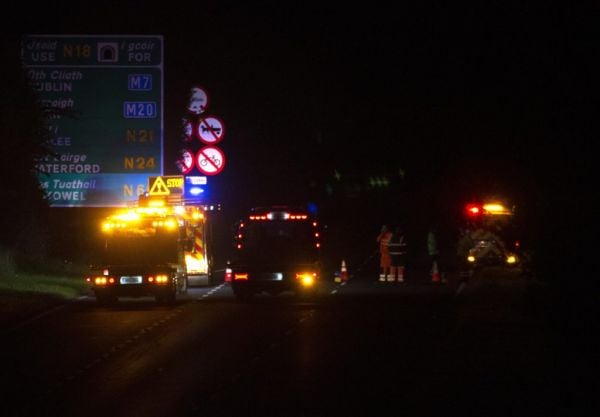 Several people are being treated in hospital after an incident involving three vehicles and a wandering animal on the N18 in Co Clare on Tuesday night.

The collision occurred shortly before 12am on the southbound lanes of the N18, just beyond Junction 5 at Cratloe.

It is understood two cars collided with a cow before a third vehicle struck one of the cars.

Units of the fire brigade from Shannon town and Limerick City responded to the incident along with several ambulances and Gardaí.

The road was closed from the Junction 5 flyover and traffic diverted away from the area while emergency services dealt with the incident.

Fire crews had to use cutting equipment to help free three people from one vehicle. It is believed four people in total were taken to University Hospital Limerick for treatment following the collision. Their injuries are not believed to be life-threatening.

A considerable amount of debris and fluids from the vehicles was left strewn across both lanes of the dual-carriageway. Fire crews and motorway maintenance personnel spent some time clearing the road and making it safe before it was reopened at around 2am.

The animal is reported to have died following the collision.

The incident is being investigated by Gardaí from Mayorstone station in Limerick City.