Amond settling into life at Exeter

IT was the end of an era last week when Pádraig Amond left Newport County to sign for Exeter City on loan for the remainder of the season. Amond became a legend with the Welsh club after scoring 59 goals in 202 appearances, including high profile cup goals against the likes of Man City, Spurs and Leicester.

However, the clubs fans were left disappointed when he was left out of Newport’s first League 2 game of the season against Oldham. The move to Exeter City happened quickly after that and he made his debut last Saturday as a substitute in the defeat against Leyton Orient. Amond then made his first start for the St James’ Park outfit when they made the long journey to Barrow for a 0-0 on Tuesday evening.

Exeter City finished just outside the League 2 Play-Off positions last season so Amond will be hoping to propel them to a higher position, starting with a home game against Bristol Rovers tomorrow.

Pádraig will continue his weekly column with The Nationalist and wrote this week about the move:

IT has been a very interesting couple of weeks for myself here in Newport and things have changed very quickly as I have joined Exeter City on loan until the end of the season. To be completely honest it was a move that I wasn’t expecting to make and one that came completely out of the blue to me but now that it has, I am delighted to be at Exeter, and I am looking forward to playing a big part in their season ahead.

As much as I would like to go into detail about what has happen I unfortunately can’t at this moment, but it was good to finally get my season up and running at the weekend. It might have come in a disappointing loss away to one of the pre-season favourites Leyton Orient, but it was still brilliant to be back on the pitch.

I signed for the club on Tuesday (10 August) just before the EFL cup game against Wycombe Wanderers and my first week was a very enjoyable one. When you sign for a new club, it is always exciting but also a little bit daunting too, but the lads have been brilliant with me so far as have the coaching staff and they have all made me very welcome too. 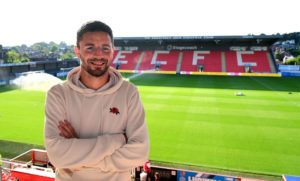 The dreaded initiation song is over and done with too thankfully and I used all my experience on Friday night to get me out of a bit of trouble on that front. I knew that there were three or four new players who had to sing, and I’ve learned that you should always be the first one to go up and sing because no matter how bad you are its over and done with. Also, there is usually one player who has a great voice and trust me you don’t want to be the one who has to follow the good singer because it becomes ten times hotter and harder up there and I’ve seen lads forget the words and crumble. As it turned out there was nothing to worry about as the four of us were terrible, but I was voted the least terrible one out of them all although I’m not sure that is something to be bragging about.

I have joined a very talented but young squad so I am very excited about the challenge ahead of me. For the past four or five seasons Exeter have always been there or there abouts challenging at the end of the season and this season I think things will be similar. The club has a fantastic reputation at bringing through young players and one of the reasons why the manager has brought me to the football club, apart from the obvious one (on the pitch), is to help and pass on some of my experience to the younger players. Hopefully I can do that, but first and foremost I have to do my own job on the pitch to help the club be as successful as possible.

Last Saturday I got my first taste of league action at St James Park in Exeter and this weekend another one of the pre-season promotion favourites Bristol Rovers provide the opposition. Joey Barton is their manager, and he has recruited very well in the off season, but things just haven’t clicked yet for them, but the same thing happened Bolton Wanderers last year and they still got promoted. I had a little taste of the atmosphere from the home fans when I was introduced to the crowd at half time in the EFL Cup game and they were very good to me so I hope I can score a few goals in the coming weeks to repay their support.