A brilliant Cliodhna Ní Shé hat-trick, her second of this this year’s Championship, wasn’t enough to prevent Carlow from falling to an agonising defeat against Antrim in the All-Ireland Junior semi-final today in Dunleer. 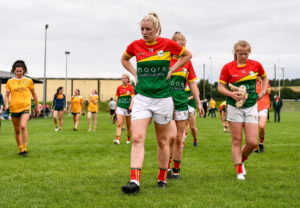 A disappointed Carlow team leave the field at Lannleire GFC in Dunleer, Louth after losing after extra time to Antrim in the TG4 All-Ireland Junior Championship semi-final
Photo: by Ben McShane/Sportsfile

Mark Keating’s team were attempting to become the first Carlow ladies football team to reach an adult All-Ireland final and they gave it everything against the Ulster team before falling to a 3-22 to 3-18  defeat after extra time.

Carlow conceded a goal after just three minutes but battled back to tie the game late in the first half before Antrim went in leading 1-9 to 0-10 at the break.

Antrim introduced the Northern Ireland international netball star Michelle Magee at half time and she went on to have a huge impact on the game, but so too did Carlow’s half time sub, Rachel Sawyer.

The half was only four minutes old when a typical Sawyer run ended with a pass inside to Ní Shé and she scored her first goal of the game. Midway through the half, Sawyer was again involved in the build up and eventually Ní Shé was fouled inside the square. The Carlow full forward converted with confidence to put her team ahead for the first time, 2-12 to 1-14.

The final minutes were extremely tense, Antrim went ahead by a point in the 59th minute but Ní Shé and the excellent Dannah O’Brien scored to put Carlow ahead in injury time but Antrim levelled and the game went to extra time.

Magee put Antrim ahead but O’Brien equalised for Carlow and Ní Shé’s third goal of the game late in the half put Carlow 3-18 to 1-21 at the break.

Unfortunately, Carlow failed to score and Antrim added 2-1 to their tally to book their place in the Croke Park final on the first weekend in September.

Carlow were devastated at the final whistle but they could hardly have done any more and it was only fine margins that separated the teams in the end.

There was better news for the Carlow camogie team as they beat Tipperary on Saturday evening in the All-Ireland Intermediate Relegation play-off by 2-19 to 3-11 to preserve their status for 2022.

See Tuesday’s edition of the The Nationalist for much more on both these games.