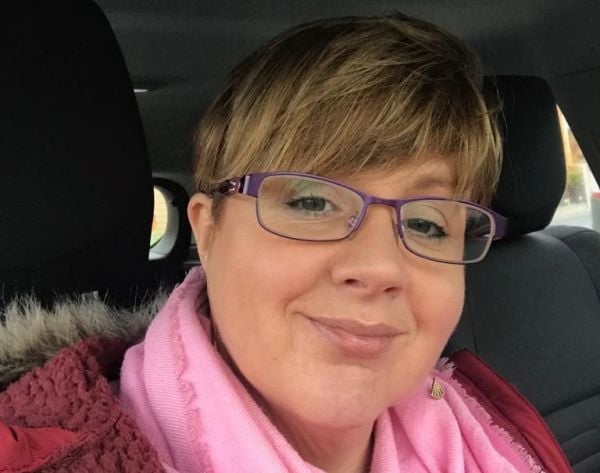 An immunocompromised mother who was refused a mixed Covid-19 vaccine at a walk-in centre on Saturday has finally received a date to get the long-awaited jab.

Dolores Grace was left bitterly disappointed and emotional after being turned away from the centre at Fairyhouse, Co Meath despite having a GP letter and being told by the HSE helpline that she met all the criteria to attend.

The mother-of-four from Athboy has been stuck between a “rock and a hard place” since her medical team decided not to give her the second shot of the AstraZeneca vaccine after she experienced a severe reaction following the first dose in March.

The 46-year-old suffered a severe headache and high blood pressure which left her hospitalised after the first jab and she fears that, over five months later, she would have little protection against the more transmissible Delta variant.

Ms Grace spent all week phoning the helpline and her medical team, after Health Minister Stephen Donnelly announced that giving mixed vaccines had been sanctioned, and she decided to turn up at the walk-in clinic early on Saturday morning.

‘I queued up with mostly teenagers’

“I have no vaccine, no life so nothing to lose, so I rocked up to Simonstown in Navan to be told that there had been a mistake on the website and that the centre wasn’t open and I’d have to go to Fairyhouse, outside Ratoath,” she said.

“I rang the helpline three times in the last week and on Friday I was told that I met all the criteria needed to get a vaccine at the clinic — I was over 16 years old, hadn’t received a vaccine in the last twenty days and wanted the Pfizer vaccine.

“I queued up in a line with mostly teenagers and the security person wouldn’t let me in, saying that I couldn’t get a mixed vaccine.

“I had to stand outside while a doctor was called to me. The doctor was lovely and explained that although the announcement had been made, nothing had been signed off. She said they had no system in place and no way of allowing it to happen.

“The doctor saw I was upset and took my mobile number, saying she would call me the minute they were allowed to give me a vaccine.

“I always knew there was a chance I’d be turned down but to get as far as the gate and be turned away was heartbreaking.

“Not having that piece of paper excludes you from so much and I got so anxious last week as the Covid-19 case numbers were so high — I was sure I’d be the one to end up in ICU.”

‘It gave me false hope’

As the Government urges everyone to get vaccinated, Ms Grace said there are many desperate for a dose who are still unable to get one.

“I have several medical conditions including Sjogrens and Rheumatoid Arthritis and I’ve had a blood clot in the past that caused heart failure,” she said.

“One of the drugs I’m on is Rituximub which works on the same ‘B’ cells as AstraZeneca. Despite all of this, I keep active and try to live a pretty normal life.

“My medical team was trying to get me the Pfizer vaccine last March but it wasn’t possible so I felt I had no choice but to take the AstraZenecca in case I would be put at the back of the queue if I didn’t. I couldn’t believe the situation I was in.

“After the first jab, I was very sick with flu-like symptoms which I was expecting but I wasn’t expecting the horrendous headache I got on day three. My blood pressure was through the roof and I ended up in hospital.

“I still have a lingering headache five months on and I’m just generally unwell. My GP advised against taking the second dose but mixed vaccines hadn’t been approved so I was rightly stuck and left cocooning.

“The Minister shouldn’t have come out and said mixed vaccines could be given out if all the i’s weren’t dotted and t’s crossed. It gave me false hope.

“Time is so important to people like me with this and the Government isn’t helping to protect us — they’ve let us down.

“Everyone has been amazing in relation to working on the helpline and on the frontline — I brought my three children to be vaccinated last week and everyone there was so lovely — it’s the system that needs to be fixed.”

However, a phone call on Saturday evening has given Ms Grace some hope again.

“I was just a melting pot of emotions on Saturday after I was turned away — fearful, disappointed, angry, sad, heartbroken. However I got a call that evening offering me an appointment in Dublin on Tuesday to get the vaccine.

“Because of my experiences to date, I’m not jumping for joy yet. I’ll keep my fingers crossed and take a cautious approach in the hope that everything will go to plan this time.

“I need to get my life back and have the same life as everyone else has — for me and for my family.”

In a statement, the HSE said: “The HSE cannot comment on individual cases.

“The advice from Niac on heterologous (or mixed) vaccination was considered and authorised by the Department of Health in recent days. The Department of Health and the HSE are in regular contact regarding general planning matters and as with all Niac advice the HSE will work to operationalise these recommendations as soon as is practical.”