U20 Hurling Championship final to be decided

One of the leading contenders against the top team in Division 2 there can only be one result here and it could be a big margin of victory. 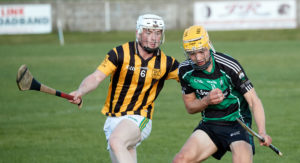 This is a repeat of their Round 2 game where Naomh Eoin prevailed by a single point. There are some quality hurlers on show here. Dean Slye scored 1-6 for Naomh Eoin that night while Jake Doyle was not as prominent then as he is now. This will be close once again. The Bagenalstown club are building momentum which might hit a snag here.