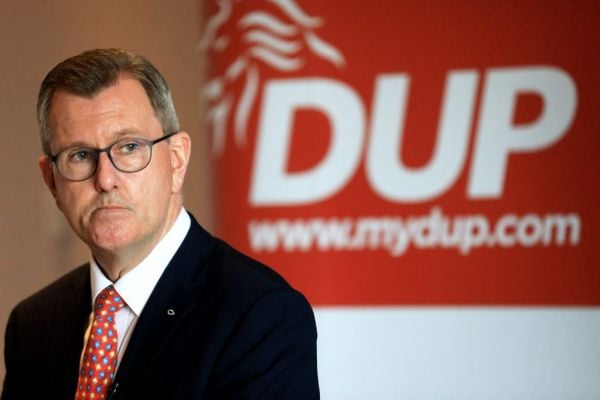 A new poll has seen support for the DUP slump to 13 per cent, being overtaken by both the Ulster Unionists Party (UUP) and the TUV.

The LucidTalk poll for the Belfast Telegraph saw DUP support drop by three points, making it the North’s fourth most popular party, tied with Alliance and the SDLP.

Sinn Féin has held firm as the most popular party on 25 per cent, followed by the UUP on 16 per cent, up two points.

It is the first time in more than 20 years that the UUP has been Unionism’s leading party.

Jim Allister’s Traditional Unionist Voice saw big gains, rising by 3 per cent to make it the third most popular party on 14 per cent.

But the decline of the DUP continues, with the party dropping three points to 13 per cent since the last poll was taken in May, at a time of chaos in the party when Edwin Poots replaced Arlene Foster.

It will make worrying reading for Sir Jeffrey Donaldson, who replaced Mr Poots as leader when he stood down after 21 days in the role.

The DUP has more than halved in three years, having stood at 31 per cent at the 2019 Westminster election.

After making steady gains in recent polls, support for the Alliance Party has dropped 3 per cent to 13 per cent, having been tied as the second most popular party with the DUP in May.

The results leave Sinn Féin vice president Michelle O’Neill on course to become First Minister after the next Assembly elections due to be held in May 2022.

Doug Beattie of the UUP would become deputy First Minister.

Meanwhile, health minister and UUP member Robin Swann has been voted the most popular leader in the North, with a massive 75 per cent rating his performance as good or great.

UUP leader Mr Beattie was next, with 44 per cent rating his performance as good or great, followed by Alliance leader Naomi Long on 38 per cent and SDLP leader Colum Eastwood on 24 per cent.

Despite unprecedented gains for his party, TUV leader Mr Allister was the least popular, with 51 per cent rating his performance as bad or awful.

He was followed by First Minister Paul Givan, who 48 per cent rated bad or awful, Mr Donaldson on 47 per cent and Ms O’Neill on 45 per cent.

Meanwhile, British prime minister Boris Johnson and Northern Ireland secretary Brandon Lewis both remain incredibly unpopular, with 79 per cent and 77 per cent respectively rating their performances as bad or awful.