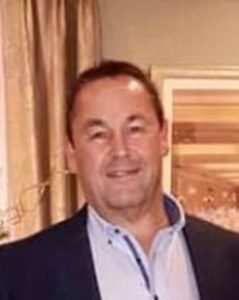 THE sudden death at his home on Tuesday 3 August of Philip (Phil) O’Grady, 22A Dublin Street, Carlow came as a great shock to his family, extended family, neighbours and wide circle of friends. A native Carlovian, Phil, who would have celebrated his 60th birthday on 24 August, was a well-known and deservedly popular man.

He was the only child of Sadie (née Nolan) and the late Philip O’Grady – his father was a native of Co Wexford. His parents lived in Manchester when Phil was an infant and he was raised in Carlow by his grandparents, the late Dick and Mary Walsh (née Nicholson) from Burrin Street – Mary was a native of Killerig, Carlow.

Dick Walsh was a well-known Carlow military man and character who served in the Spanish Civil War with Franco’s nationalists and also soldiered in World War II with the British Army. Dick treated Phil as his own son and it was mainly through his influence that Phil developed a love of the great outdoors, enjoying hunting, shooting and fishing.

His loving grandson Jayden, aged eight, placed a toy fishing rod on his grave at his burial, symbolic of Phil’s love of rod and line. Phil was also well known in the Carlow area as a talented pool player.

A carpenter by trade and gifted with his hands, Phil was educated by the Christian Brothers and at the vocational school in Carlow. He lived in Ontario, Canada for a couple of years, working in construction. He returned home to Carlow, where he engaged in a variety of occupations, which are fully outlined in the appreciation of him below. He also worked for a number of years as bouncer for publican Seán Furey at The Tavern licensed premises on the town’s Castle Street.

In a eulogy to Phil at the end of his funeral Mass in the Cathedral of the Assumption on Saturday 7 August, his first cousin Sally Doyle described Phil as “her best friend”. Continuing, Sally said they were gathered “to mourn and celebrate the life of a great man. Phil’s untimely death has,” she said, “shocked us all to the core”.

She went on: “Philip grew up with us in Burrin Street and all 12 of us (the Walsh family) siblings called Philip our brother. He was always laughing, joking and getting up to mischief. He carried this mischievous trait into his adult years and this is what attracted such a wide circle of family and friends to always want to be in his company. Philip has more friends than he has had hot dinners!”

Highly intelligent, he trained as a carpenter when he was young. He turned his hand to every job possible over the years, working as a caretaker in the boys school and the Holy Angels, more recently as a painter with his great friend Richie Nolan, and his own son Aaron.

Sally said that as stepfather to Dawn, he loved her like his own and had lived for Aaron. She referenced the many countries that Phil, Janet, Aaron and Dawn had visited and also the joy Phil got from watching Aaron compete in karate.

“Philip lived with his dear mother Sadie. They had a very special relationship. Phil would cry laughing at the good of winding his mammy up and joking with her. He would always make sure his mammy was okay and had everything she needed.”

Sally said that Philip also loved the partners he had over the years and remained friends with them all.

She commented: “A gentleman, a provider, a joker with a heart of gold, he never had a bad word to say about anyone or anything. He was a breath of fresh air.”

Sally had no doubt that Philip’s spirit will continue to watch over and guide Sadie, Aaron, Jayden and Dawn.

“The memories we have all shared with Phil – though our hearts are broken – will continue to always make us laugh and smile. I love you so much, Phil, we all do!”

Sally concluded her eulogy by reading The family tree, a poem she felt was appropriate to Philip, which went as follows:

A limb has fallen from the family tree,

I keep hearing a voice that says, ‘Grieve not for me.

Remember the best times, the laughter, the song.

The good life I lived while I was strong.

Continue my heritage, I’m counting on you.

My mind is at ease, my soul is at rest,

Remembering all, how I truly was blessed.

Continue traditions, no matter how small.

Go on with your life, don’t worry about falls

I miss you all dearly, so keep up your chin.

Until the day comes we’re together again.

Fr Yanbo Chen was celebrant of Phil’s funeral Mass, at which the readings were by Gillian Campbell (cousin), while Prayers of the Faithful were recited by Pearl Carroll (cousin), Jasmin Dooley (cousin) and Philip’s lifelong friend Pat Fennell, Hanover.

The beautiful singing of hymns was by the Doogue sisters from Graiguecullen.

Following Mass, Philip was laid to rest in St Mary’s Cemetery, with Fr Yanbo reciting the final prayers at the graveside.

In the 1980s, Phil was instrumental in arranging video interviews with Dick Walsh, Charlie Lewis, Pat O’Mahony, Bobby Lyons and many of the other ageing Carlow characters for our ‘Living Memory’ project.

An entertaining raconteur, Phil often recounted events relating his to his travels, especially with Carlow Karate Club. He had a keen interest in history and had collected ephemera and all kinds of odds and ends and was in his element when, with a beaming smile and boyish enthusiasm, he would display his latest acquisition from some market or on DoneDeal.

In 2012, Phil transferred to The Centre for Independent Living, where he became involved with the Carlow Senior Citizens’ Association in the refurbishment of their centre, while remaining available to assist several other organisations.

When this employment terminated in 2014, Phil continued to be available on a voluntary basis. During the Covid-19 pandemic, he became involved, up to the time of his sudden death, in distributing food packages and PPE to the needy.

Phil has left behind a legacy of unselfishness and loyalty that will be difficult to replace, but the memory of same will nourish his family and friends for many years to come.