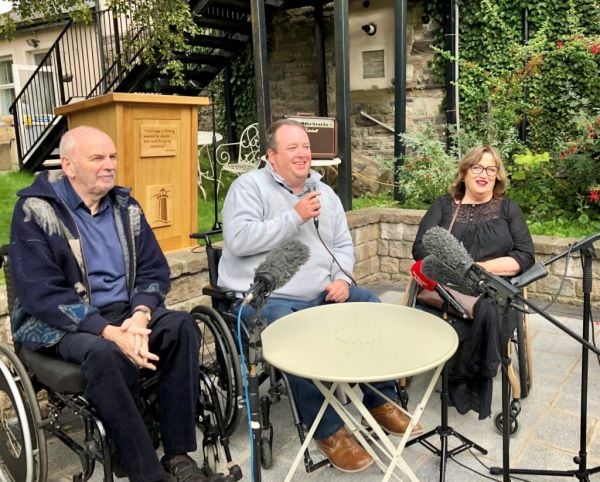 Injured victims of the Northern Ireland Troubles have said the opening of a long-delayed pension scheme has finally delivered recognition of their suffering.

After years of political and legal disputes, the compensation scheme opened for applications on Tuesday.

The Troubles Permanent Disablement Payment Scheme is open to those who suffered severe and permanent physical or psychological injury during the conflict.

Injured victims who use the Wave Trauma Centre in Belfast started the campaign for recognition payments 13 years ago.

They gathered at the centre on Tuesday to mark the successful conclusion of a long journey.

Jennifer McNern, who lost both legs in a bomb blast at a Belfast restaurant in 1972, took a successful legal challenge against the Stormont Executive for delays in setting up the scheme last year.

“It definitely about recognition finally,” she said.

“Nearly 50 years I just went into a restaurant for a coffee and I woke up in the Royal Victoria Hospital minus my legs and my sister had lost both legs and an arm and the sight in one eye in that explosion as well.”

Ms McNern said injured victims had been “shoved aside” in the peace process, with no acknowledgement of the pain they continued to endure.

Alex Bunting had a leg blown off in an under-car bomb attack in Belfast in 1991.

The former taxi driver, who was targeted by the IRA in a case of mistaken identity, said he had to exist on welfare payments from the day of the attack.

“It’s not about being wealthy or getting a whole lot of money,” he said of the pension.

“It’s just about surviving and having enough money to get through day to day and it’s very important that happens.

“As you see us sitting here today, we are still suffering, we are still going for operations, it’s not you get blown up and you forget about it and that’s it – the pain still goes on.”

Paul Gallagher, who was paralysed after being shot by loyalists in 1994, said the opening of the scheme represented a “great day”.

“Today is the end of a long, long journey for many injured victims, not just in this group, but across Northern Ireland and across the UK, people who were injured in some way shape or form by what happened in our past.”

Alan McBride, a co-ordinator at the Wave centre, paid tribute to the injured victims who had spearheaded the campaign.

I would have thrown the towel in a long time ago

“If this was down to me, I would have thrown the towel in a long time ago.”

Mr McBride said there was now a need for a similar scheme for those bereaved during the Troubles.

During Tuesday’s event at the centre, campaigners paid tribute to the injured victims who had died before the scheme became operational.

Stormont ministers welcomed the opening of the pension.

First Minister Paul Givan said: “Victims have waited too long for this moment and I would encourage all those who are eligible to submit applications to the scheme.

“It has been humbling to engage directly with people who have suffered as a result of the Troubles, and I am aware of the issues that they face on a daily basis. This scheme will give people the practical support and recognition that they deserve.

“It is also important to remember today, those who campaigned for this scheme but who are unfortunately no longer with us. This will be a difficult day for many people and we should not lose sight of that.”

Deputy First Minister Michelle O’Neill said: “Today is a significant moment for those who have suffered permanent disablement as a result of the conflict.

“This has been a difficult and painful road for victims and survivors; I am pleased that the opening of the scheme will allow for the recognition and acknowledgement of that suffering, and provide the financial support they need to help them move forward with their lives.”

Justice Minister Naomi Long added: “The Troubles had a severe impact on the lives of many individuals who suffered a permanent disablement. I trust this important scheme will go some way to recognise the suffering of those individuals and their families.”

Further information about the scheme is available at www.victimspaymentsboard.org.uk