THE Midlands Scratch Cup has been hosted by Carlow Golf Club since it was first played in 1950 and continues to be a premium event on the Irish Amateur circuit today. There have been many notable winners over the years including Walker cup stars Joe Carr, Sutton GC (6 times) and England’s Peter McEvoy (4 times). Padraig Harrington also won the event in 1993 and 1994 before joining the professional ranks. Remarkably however, Carlow GC has only had one local winner way back in 1980 when Jim McVeigh prevailed. Jim continues to play to a high standard today (2 handicap) and is an inspiration to Carlow’s younger generation of golfers coming through the ranks.

The 41 year drought finally ended on Saturday 28th August when Carlow’s Dale Bolger stormed to an emphatic win. Coincidentally Dale and Jim are both former students of Carlow CBS Academy. Dale is from a popular golfing family, his Dad Jimmy is Head PGA professional in Kilkenny GC and his Mam Leigh and brother Jamie are also accomplished golfers. Dale played exceptional golf with rounds of 69 and 70 over Carlow GC’s championship course which was prepared in excellent condition and presented a tough test for a very strong field. Dale, playing off plus 1 handicap, has been playing great golf this year and produced his best form when it mattered most. Leading after 18 holes, he finished his second round with a birdie, birdie finish to complete the back 9 holes in 2 under par 33 to finish 6 shots clear of runner-up Colum Kenny (Portmarnock). In third place was Brian Lenihan (Ballybunnion) on 146 which included a hole in one on the 17th. There were also a number of other fine performances by Carlow golfers, Barry Murphy finished an excellent fourth and Brian Healy just pipped Jamie McDonald to finish in fifth place. Eamonn J Long also played very solid golf to win the overall nett prize. 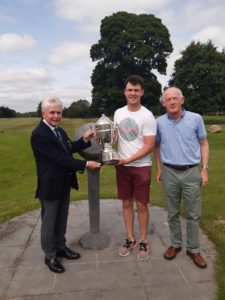