CARLOW rugby twins, Bryan and Ed Byrne, are looking forward to a new rugby season but both players will be coming into their respective opening games from completely different directions.

Bristol Bears hooker, Bryan, will not be playing until the end of November or perhaps early in December as his rehabilitation continues after having had operations on both knees.

In contrast, Ed is back in pre-season training with the province set to start competitive fare with a home game in the new United Rugby Championships against Vodacam Bulls at the RDS on 25 September.

After a brilliant run in the Premiership where they headed the table before the knock-out stages the Ashton Gate side looked set for overall glory. All the more so when they held a 28-0 half-time lead against Harlequins. It all changed in the second half and the Bears lost 43-36 to crash out of the English Premiership.

Byrne missed that match but the defeat hurt deeply. He says the club will learn from this.

“I am very much looking forward to a new season but unfortunately I am not over my injuries just yet. I got both knees done so there is another few months of rehab until I am back on the pitch,” he explained.

“The big thing is that if we ever get back into a position like that we have to learn from our mistakes that we made in that semi-final.” 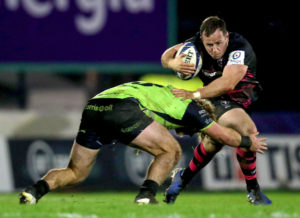 The Bears didn’t go crazy in the transfer market during the off-season. They did bring in Tom Whiteley a scrum-half from Saracens while Antoine Frisch, a French number 12, is also on board.

“I haven’t seen him play before but he is training very well so it will be interesting to see how he goes,” said Bryan who is delighted with the support he has received from the club while he recovers from his injuries and subsequent operations.

Meanwhile his brother, Ed, is training with Leinster as they look forward to a new season. The Rainbow Cup competition fizzled out last year but Ed had the satisfaction of winning yet another PRO 14 cup medal when he played a prominent part in the club’s 16-6 final victory over Munster.

“It made sense at the time to do it at the time,” he said referring to the ill-fated Rainbow Cup. “It was unfortunate some of the teams could not compete. You could see what they were trying to do with the way the season was mapping out. It is nice to have something different this season.” 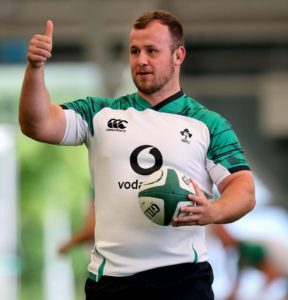 Ed Byrne is gearing up for a big season for Leinster and Ireland
Photo: ©INPHO/Ryan Byrne

Capped by Ireland last season, Ed is looking to at least repeat what he did in the 2020-21 season.

“I really want to push on and get a good start in big games. Get back into Irish camp. Nothing much has changed in terms of that. I want to try and really push on and make the most of the season ahead. We are into pre-season now, really enjoying it and hopefully it will be a really good season for us.”

Meanwhile Tullow’s Charlie Ward is one of twelve players named in the Connacht Academy Squad for the 2021-22 season.

Also making waves at representative level is Dannah O’Brien, the Tullow out-half, and also Carlow GAA player, who scored nine points (3 conversions and a penalty) for the under 18 Leinster team who beat Connacht 24-0 at the High Performance Centre in Dublin last weekend.

Byrne family finally get to see Ed in action for Ireland