CARLOW sprinter, Marcus Lawler, was on an Irish relay team that ran into second place in the 4 by 100 metres relay race at a meeting in Budapest on Tuesday. The team consisted of Conor Morey (Leevale), Steven Gaffney (Rathfarnham AC), Mark Smyth (Raheny Shamrocks) and Lawler who is now running for Clonliffe Harriers. Their combined time of 39.68 puts them fifth fastest ever for an Irish relay team for the distance. 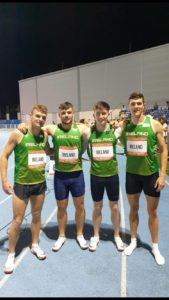 The team have only come together recently and their practice on the baton has been limited as Lawler explains.

“We only met twice since I came home from Tokyo. The changeovers are a massive part of relays. Here, our changeovers were good, conservative and smooth. We could have stretched them out but this would have made them more risky. We were conservative making sure we got a good time on the board and got the baton around,” explained Lawler who says they are looking at a bigger picture going forward.

With the European Championships set to take place next year Ireland are hoping to get the necessary time and send a team. This was a good run.

“You need two times so we got one on the board. It was the fifth fastest ever by an Irish team so it was not a bad return,” agreed Marcus.

“The beauty is there is scope for more. The national record is 39.39 and we ran 39.68 so it was a good return. We aim to break that national record next year. We have a good enough four people to do it. There are probably a couple of subs who could get in there too.

“When you are putting a team together like that you need your top guys togging out. We practiced the changeovers once. It could have gone smoother but this was all about getting the baton around.”

Up to Friday, the Carlow sprinter has run at two different meetings since Tokyo representing Clonliffe in the national league in Dublin while he also ran the 200m in Hungary. At the weekend he ran a season’s best of 20.69 at The Mary Peter’s Track at the Belfast Open. Now he is hanging up his spikes for about a month.

“I am happy enough and call a halt to it. They key is to take four weeks off, not look at a track at all and switch off. The cycle starts again. The World championships and European championships are on next year.”