MEATH’S victory over Dublin to lift the ladies SFC title for the first time is one of the fairytale Irish sports stories of the year and in the background a Carlow man played a huge part in bringing the Royal County to the Promised Land. 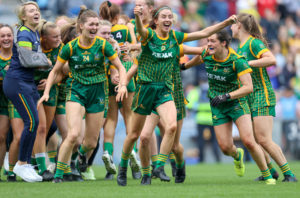 Mark Brennan is well known with the county for what he did as a player, won SFC titles with Old Leighlin, SHC titles with Naomh Bríd, captained Carlow to Christy Ring success at Croke Park and also as a manager led the Carlow camogie team to the Premier Junior title at Croke Park in 2016, as well as enjoying great success as manager of the Myshall camogie team.

Brennan initially linked up with Meath as a strength and conditioning coach and was there when lost in the 2018 and 2019 Intermediate finals to Tyrone and Tipperary. He took a coaching role for the 2020 as Meath finally got over the line against Westmeath.

Meath have kicked on since that Intermediate Championship win and they followed their amazing late comeback semi-final win over Cork with a quite incredible 1-11 to 0-12 win over Dublin in Croke Park.