CLIODHNA Ní Shé is the  Golden Boot Award winner for the 2021 GAA All-Ireland Championships. Across the junior, intermediate and senior football championships she came out on top with a staggering 9-19 for Carlow ahead of Armagh’s Aimee Mackin (4-28) and Marie Kealy of Wicklow (0-38).

Going into All-Ireland final Sunday Mackin couldn’t add to her total so Kealy needed to score 0-11 to overtake the Carlow sharp-shooter. Sara Dillon of Westmeath who were playing Wexford in the intermediate decider was also a danger to Ní Shé. As it turned out Kealy scored 0-3 in Wicklow’s victory over Antrim while Dillon hit 1-6 which was not enough as Westmeath overwhelmed Wexford.

Grainne McLoughlin was also in with a chance of catching Clíodhna and while the Antrim player scored 1-5 it came up short on overall success.

Having been given two tickets by the Ladies Gaelic Football Association, the winner received the Golden Boot award on the Croke Park pitch on Sunday after the senior final. It was a bitter-sweet moment for the Bennekerry-Tinryland star. 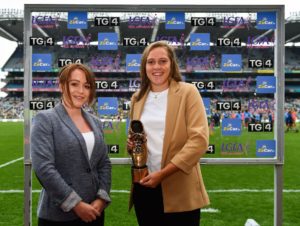 Meanwhile the Carlow sports star says she has not given up the hope of playing with Carlow in Croke Park on All-Ireland Sunday. A new intercounty season cannot come quickly enough for her.

“We will give it a go. We have a lot to build on. We did really well. We narrowly lost out on playing in the final. We will push on, work harder and hopefully we can be there next year,” she promised.