CARLOW’S Wexford Youths contingent of Kylie Murphy and Lauren Dwyer will have to do it the hard way if they are to reach this year’s EVOKE.ie FAI Women’s Cup final after they were paired with holders Peamount in the semi-final draw. 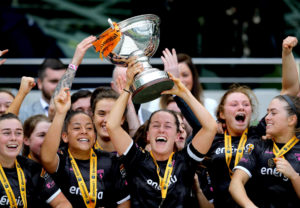 Kylie Murphy and her Wexford Youths team-mates would love to get their hands on the FAI Cup again but they’ll have to get past old foes Peamount if they are to reach the final
Photo: ©INPHO/Ryan Byrne

It will be the fourth successive season that the teams will have met in the latter stages of the cup. Both Murphy and Dywer featured when Wexford beat Peamount in the 2018 and 2019 finals, Murphy was captain on both occasions, but they were denied the chance to go for a three in a row when they were beaten by Peamount at the semi-final stage last year. Peamount went on to beat Cork City in the final to complete a league and cup double.

Peamount are currently in a strong position to retain their league title and Wexford Youths lie four points behind them. The league games between the teams have been extremely close so far. Peamount beat Wexford 1-0 in Ferrycarrig Park in just the third game of the season back in March and since then the sides have played out a 2-2 draw in Peamount in June and a 1-1 draw back in Wexford last month.

Shelbourne play Cork City on the other side of the draw and the games will take play place on the weekend ending 10 October, with the final to take place in the Tallaght Stadium in November.