Carlow psychiatric nurses graduate with honours from Waterford IT 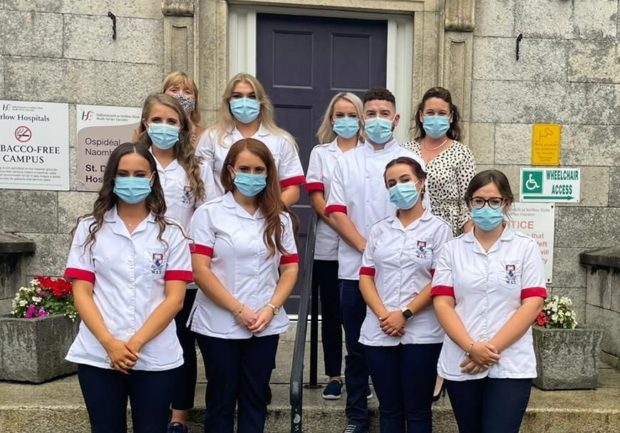 TRIBUTES were paid to Carlow psychiatric nursing graduates who recently completed their honours degrees at Waterford Institute of Technology.

Four years of study at WIT, featuring 80 weeks of clinical placements in HSE/South East Community Healthcare mental health services, was marked in five small ceremonies across the region this week for 50 graduates of WIT’s BSc (honours) in psychiatric nursing.

Twelve students were presented with their qualifications at the old church on the grounds of St Otteran’s Hospital, Waterford. And similar ceremonies were hosted for 11 students at the Wexford Mental Health Services offices in Enniscorthy; ten at St Canice’s Hospital, Kilkenny; and nine at St Luke’s Hospital, Clonmel.

Having begun in September 2017 and on completion of their training in the HSE in the coming weeks, the 50 participants will register with the Nursing and Midwifery Board of Ireland as psychiatric nurses.

Congratulating all concerned, David Heffernan, head of Service/Mental Health, HSE/SECH, said: “This group of graduates have continued their training during the unprecedented times of pandemic and they have contributed enormously to delivering the highest possible standards of care in mental health services throughout counties Carlow, Kilkenny, South Tipperary, Waterford and Wexford in that time. They have both our sincere appreciation and admiration for their commitment.

“Psychiatric/mental health nursing is a specialist field within the healthcare profession. It involves an interpersonal, caring process, which acknowledges the uniqueness of each person. The psychiatric nurse is concerned with the promotion of mental health, the prevention of mental illness and the provision of care to those with mental health problems.”