TALENTED Tullow RFC player Dannah O’Brien will be hoping to help the Leinster U18 women’s team to Interpro glory when they take on Munster in MU Barnhall RFC at 3.15pm tomorrow.

Leinster have won their first two games without conceding a point, against Ulster (24-0) and Connacht (54-0) and outhalf O’Brien has played a key role. 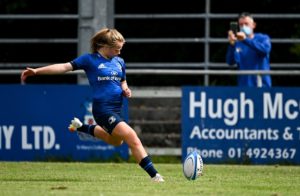 Dannah O’Brien kicks one of her four conversions during the IRFU U18 Women’s Interprovincial Championship Round 2 match between Leinster and Ulster at Templeville Road in Dublin. Photo by Ramsey Cardy/Sportsfile

She quickly turned her attentions to pulling on a blue jersey after starring for the Carlow GAA team this season and speaking after last week’s win over Connacht, told Nationalist report Kieran Murphy that she is really enjoying her season.

“It is good to be back after Covid. It was a tough time without sport but now we are back it is amazing. Last year I was in training camp which was cut short because of Covid. We have been back since July this year,” she explained.

Against Ulster she started at out-half before moving into the number 12 position. Overall she landed four conversions and was pleased with her contribution. She says she is part of a team with a strong focus and a vision of how the game should be played.

“Mick Bolger is the head coach and brains of the operation. He is very committed and has a match plan which is very effective,” said the Tullow CS Leaving Cert, student who sees the possibilities of a career for her in sport at some level.

“I really enjoy playing sport. I would hope there is a route to keep playing and keep progressing.

“I would say getting to the All-Ireland semi-final with Carlow this year was a career highlight. I had never been there before and even though we lost it was a great opportunity. I am even looking forward to next year already.”

She says she would never have been able to do what she does now without the help of those around her.

“I would like to thank my club, my family, my friends. The whole community. It is mad. People who I looked up to are all backing me,” smiled the St Anne’s GAA player who lives in Kilbride.

She will have plenty to smile about if her Leinster side can see off Munster tomorrow.