New boat opens the waterways for leisure trips on the Barrow 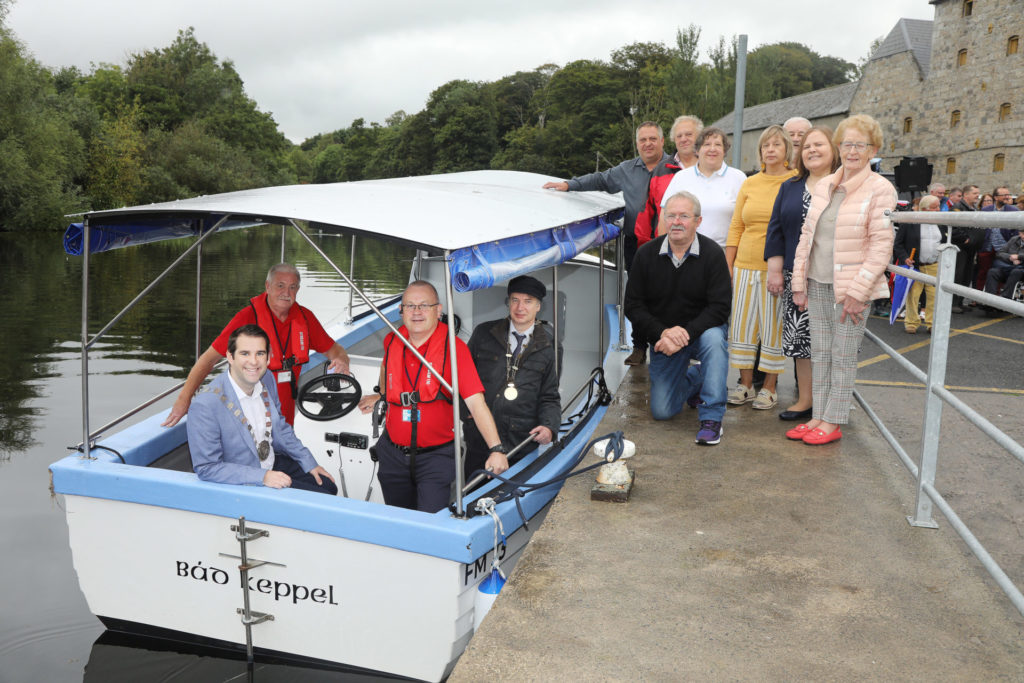 A NEW boat has been launched in Carlow to open up the waterways to public river boat trips, thanks to a new social enterprise and its team of volunteers.

Bád Keppel took to the waters of Bagenalstown this weekend and can carry 12 passengers along the River Barrow, offering a new activity for locals and tourists alike. Tours kicked off  on Friday and will run until Sunday 3 October, with continued late-season trips depending on the weather.

James Lakes, volunteer skipper and captain of the boat, says it was named after a special volunteer.

“The late Arthur Keppel was a river and boat man who loved Bagenalstown and helped us in the early stages of this project. He was well known as a judge in the Barrow Awards each year and knew every town and village that the Barrow flows through,” said James.

Sadly, Arthur died just as the project started in 2018.

The crew introduced Bád Keppel to the Barrow last weekend for its maiden voyage, a trip to Goresbridge.

“Travelling by boat on the river, you can see everything from the little bridges under the bank, to aquatic life such as trout, eels or pike beneath the crystal-clear waters. There are picnic areas and sights that are inaccessible to traffic. You’ll only experience them when on the river,” says James, who adds that the sounds of river life are peaceful, with the purr of the engine and the sounds of birds overhead with the ducks and swans swimming alongside you.

Social enterprise Bagenalstown Trip Boats Ltd will run the trips for the next four weeks with the boat, which was built at Fitzgerald Marine in Kinsale.

Bád Keppel will be moored at the quay in Bagenalstown and will travel upriver to Rathellen Lock and to Bagenalstown Lock (or Rae’s Lock). The trips are short for now, but will stretch further next year, when the tourist season kicks off.

The enterprise is hoping that local businesses and community groups will connect with them to provide boat tours to local destinations.

Seán Ryan, project manager for Carlow Local Enterprise Office, which supported the project, says it was a huge effort from the small-but-mighty community.

“They need to be congratulated for their foresight and commitment. It is a commercial enterprise, which shows the depth of support and commitment for the area,” he said.

His role was to ensure the commercial enterprise acquired all relevant certification under national guidelines.

“All six volunteers were trained up as Inland Waterways skippers, with commercial endorsement from Irish Sailing. All skippers were also trained in first-aid and sea survival,” said Seán.

Seán says the area was fortunate to have a group of volunteers to give up their time to manage the project.

“This requires a huge commitment by any volunteer. Becoming a skipper is a responsible task and is time consuming. The training and process was an intensive time for them to ensure they have the best qualifications on the boat,” he adds.

Seán remarks that the project would not have happened without the volunteers and the support of Bagenalstown Improvement Group (BIG).

“They were pivotal in supporting the process, as were Carlow County Council and the Department of Rural and Community Development.”

Paddy Gardiner, chairman of the Bagenalstown Improvement Group (BIG), which kick-started the project, says the idea was first floated in 2018.

“We saw the need for our own boat to run trips up the Barrow, so we set about a feasibility study to see if we could do something. With the help of Arthur Keppel and the Local Enterprise Office in Carlow, we managed to get the idea off the ground.”

He says they now want to hear from community groups and businesses who would like to work with them to provide trips and tours on the water.

“Communities play a key role as a catalyst for change in our rural communities and I’d like to congratulate the community in Bagenalstown for this wonderful project.”

Kathleen Holohan, chief executive of Carlow County Council, said the council was delighted help deliver a new tourism experience on the River Barrow, in partnership with the community and with support from the Department of Rural and Community Development.

There will be three daily trips on Bád Keppel– at noon, 2pm and 4pm – with tickets for adults costing €10 and €5 for children.