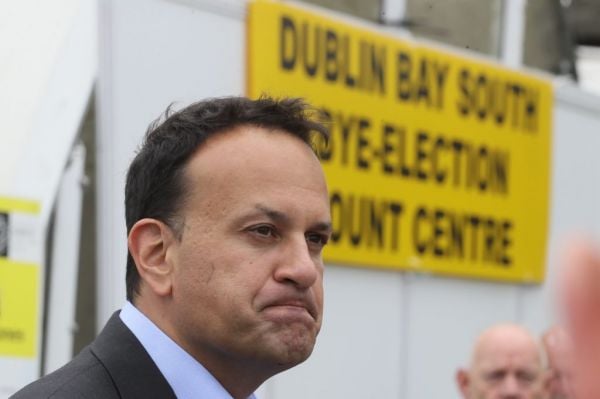 Leo Varadkar and Fine Gael have seen a significant decrease in popularity in two separate opinion polls this weekend.

Weeks after the Katherine Zappone appointment and Merrion Hotel incident, Fine Gael were down two points in the Business Post Red C poll on 28 per cent, while The Sunday Times Behaviour and Attitudes (B&A) poll saw Leo Varadkar’s popularity plummet to 39 per cent, down nine points.

As the Irish Examiner reports, Fine Gael are now 10 points behind Sinn Féin on just 23 per cent in the same B&A poll.

Mary Lou McDonald remains the most popular party leader in the country, on 48 per cent, with the Taoiseach Micheál Martin on 45 per cent.

Mr Varadkar comes fourth, after Labour Party leader Alan Kelly who remains unchanged on 44 per cent. The Labour Party however remain on 5 per cent.

Sunday’s results are the first time Sinn Féin has topped the Red C poll since the tracking poll started in 2003; Mary Lou McDonald’s party are on 29 per cent and remain the most popular party with 18-34-year-olds and has a strong lead among 35-54 year-olds.

Both polls are set to sharpen minds as the Fine Gael think-in begins today in Trim, Co Meath.

The Minister for Enterprise was then photographed last week at a music festival in London, days after saying that Ireland should not follow England’s example when it came to outdoor music events amid an ongoing row on whether the Electric Picnic music festival could go ahead.

Fine Gael face a further headache this week as Minister for Foreign Affairs Simon Coveney will face a vote of no confidence on Wednesday over the appointment of Katherine Zappone to a role in the UN and admitting to deleting text messages from his phone, in direct contravention of the FOI Act.

It is expected that the Government will win the vote, however, Fianna Fáil TD John McGuinness has indicated he may not vote with his party, a move that would see him suspended from Fianna Fáil for six months.

Deering loses out on Seanad seat