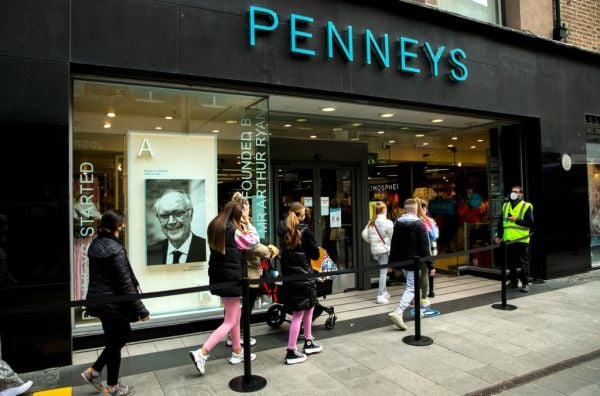 The Primark plan for a €118 million distribution centre for Newbridge, Co Kildare is to deliver 482 full time and temporary jobs.

That is according to planning documentation lodged with Kildare County Council for the all island Penneys distribution centre at Greatconnell, Newbridge.

The Environmental Impact Statement (EIS) lodged with the scheme states that when the distribution centre becomes operational, it will employ 212 people.

This is in addition to the peak construction work force of 270 for the project.

The EIS states that the estimated capital spend of €118m on the project includes €43m construction costs for the base build by applicant, Barola Capital DAC which is Primark’s property investment arm.

An additional €75m is to spent by Primark on the internal fit out and equipment for the semi-automated centre.

One of the largest clothing retailers in Europe, Primark operates 36 Penneys stores in Ireland.

Architects for the scheme, TODD Architects – which has designed Titanic Belfast – state that the uniqueness of the internal specification required for such automation at the distribution centre “would render the unit one of the most leading edge Distribution Centres in Europe”.

Planning documents state that in addition to direct employment, there will be substantial off site employment and economic activity associated with the supply of construction materials and provision of services such as professional firms supplying financial, architectural, engineering, legal and a range of other professional services to the project.

The project comprises a distribution warehouse facility of 64,550 square metres and the amount of floor space in office accommodation is almost as large at 62,925 square metres.

The proposed distribution centre – located 1.5km east of Newbridge town and 1.9km west of Junction 11 on the M7 motorway – is to operate seven days a week 24 hours a day.

The site – which will have capacity for 110 lorry parking spaces – is bounded by the Newbridge South Orbital Relief Rd.

The EIS lodged with the scheme states that Primark’s existing distribution centre located 2km from the proposed development site uses a logistics systems that is “outdated and inefficient”.

The adjacent lands to the planned Penney’s Distribution Centre are occupied by Lidl Ireland which recently completed a regional distribution centre and Pfizer which operates a pharma plant to the north west.