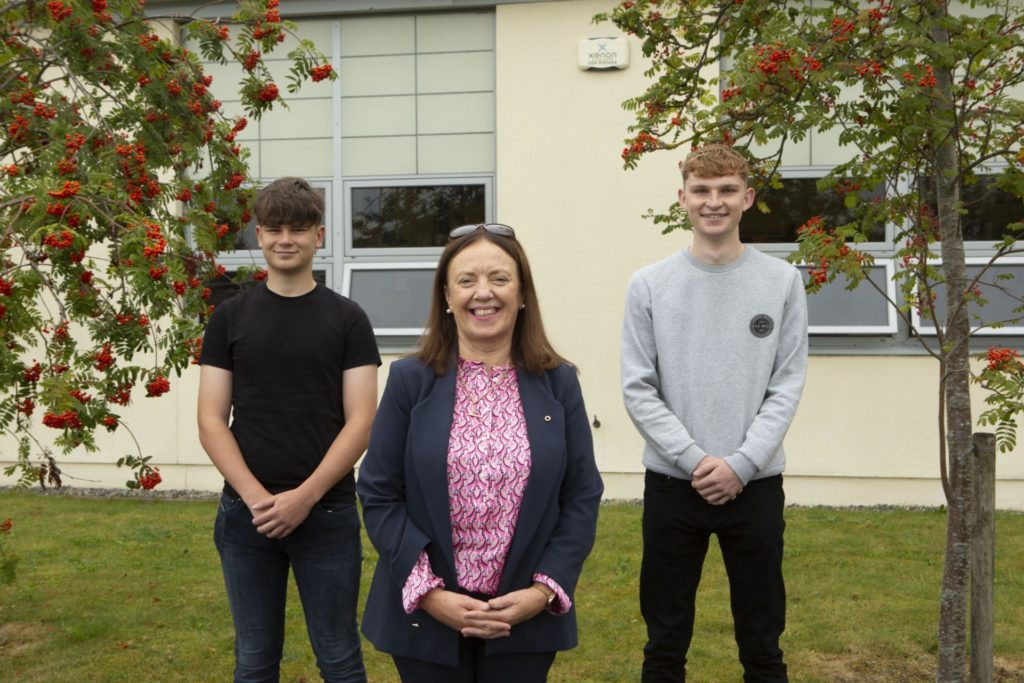 Aongus Ó Sé and Eoin Ó Teimhneáin, students at Gaelcholáiste Cheatharlach, who both achieved the maximum 625 points in their leaving cert with their príomhoide Madailín Mhic Lochlainn

TWO classmates and friends since junior infants shared yet another memorable moment last week when they both secured a maximum 625 points in their leaving cert. Aongus Ó Sé and Eoin Ó Teimhneáin, both students at Gaelcholáiste Cheatharlach, were thrilled to discover their phenomenal result – a testament to their incredible hard work and commitment over the past two years.

“I couldn’t believe it – I was just really shocked,” said Aongus, son of Diarmuid O’Shea and Fionnula Ní Mhordhna from Tinryland.

Aongus has now been offered and accepted his first choice on the CAO: maths and economics at Trinity College, Dublin and is looking forward to heading off to college later this month.

Eoin admits that he, too, was shocked to see the magical 625 points staring back at him.

“It was a big shock. I sat there just looking at it,” he smiles. Son of John and Mary Tynan from Castledermot, Eoin was delighted to accept his first CAO offer this week of engineering in UCD.

Both are classmates and friends since they were five years’ old and junior infants at Gaelscoil Eoghain Uí Thuairisc. Quite rightly, they are proud of and delighted with each other’s achievement.

“I met Aongus on my first day at school in the Gaelscoil and we’re friends since then and in the same class at the Gaelcholáiste,” says Eoin.

The difficulties of the past year make the boys’ results all the more impressive.

“The Gaelcholáiste, all the teachers and everything, were so helpful, especially during the lockdowns when the motivation could have been lost. All the classes continued online; the routine was kept the same and that really helped,” said Aongus.

Aongus also found it was a great benefit to attend Study Home – based at Staplestown Road, Carlow – every day to continue his studies after school.

“I would struggle with motivation, so it was great to be able to walk down there and start into study until 8pm; that was a big help,” he added.

Eoin, too, is grateful for the support he received at the Gaelcholáiste and credits attendance at Carlow Academy, Tullow Street with being a “big help” to his studies. “I went there after school to study and that was a big help. It was intense and focused study, so I found that really helped me,” he added.

Eoin has an older sister Alison, while Aongus is the youngest to sister Clíodhna and brother Conall. In fact, last week proved quite the exciting week in the O’Shea household, with Clíodhna winning the golden boot as the top scorer in the Ladies GAA Championship for her remarkable season with Carlow.

“Yeah, she stole my thunder,” laughs Aongus. “We’re all so proud of her.”