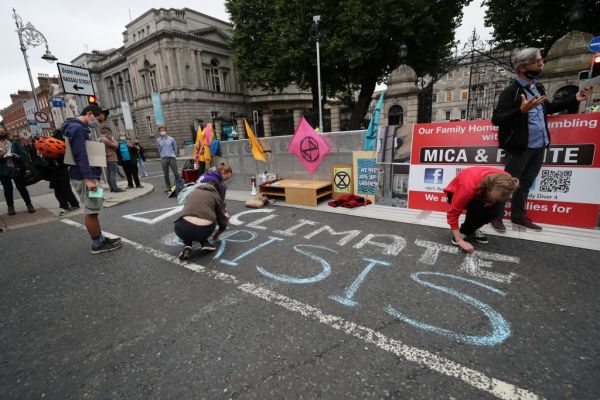 Members of Extinction Rebellion and other activists gathered outside Leinster House on Wednesday morning for a demonstration ahead of TDs reconvening after the summer recess.

They were joined by campaigners demanding a 100 per cent redress scheme for housing defects caused by the mineral mica.

A protest was also set to take place on Wednesday evening to draw attention to Ireland’s housing crisis.

Angela Deegan, from Dublin, said: “I have been aware of the climate crisis for many years now and how bad it’s getting and how little action there is in our Government.

“We need things to change in our systems, so people cannot be emitting so much greenhouse gas.”

She said Ireland needs to cut the size of the national herd and to better insulate buildings as part of a range of measures to reduce the impact of climate change.

Some protesters expressed disappointment at the Greens’ record in Government so far.

Eamon Ryan’s party gathered in south Dublin earlier this week for a think-in, and the leader said that, in the coming months, they would build on the successes of their first year in the coalition.

The Government’s latest action plan for tackling climate change will be published in the first week of October.

Sean Loughran, from Dublin, said he voted for the Green Party at the last election but has been disappointed by the party so far.

“There hasn’t been an end limit put on combustion engines yet.

“I think we need to move towards a more plant-based food system and there’s no word of that yet.

“I’m not as optimistic about the Green Party any more.”