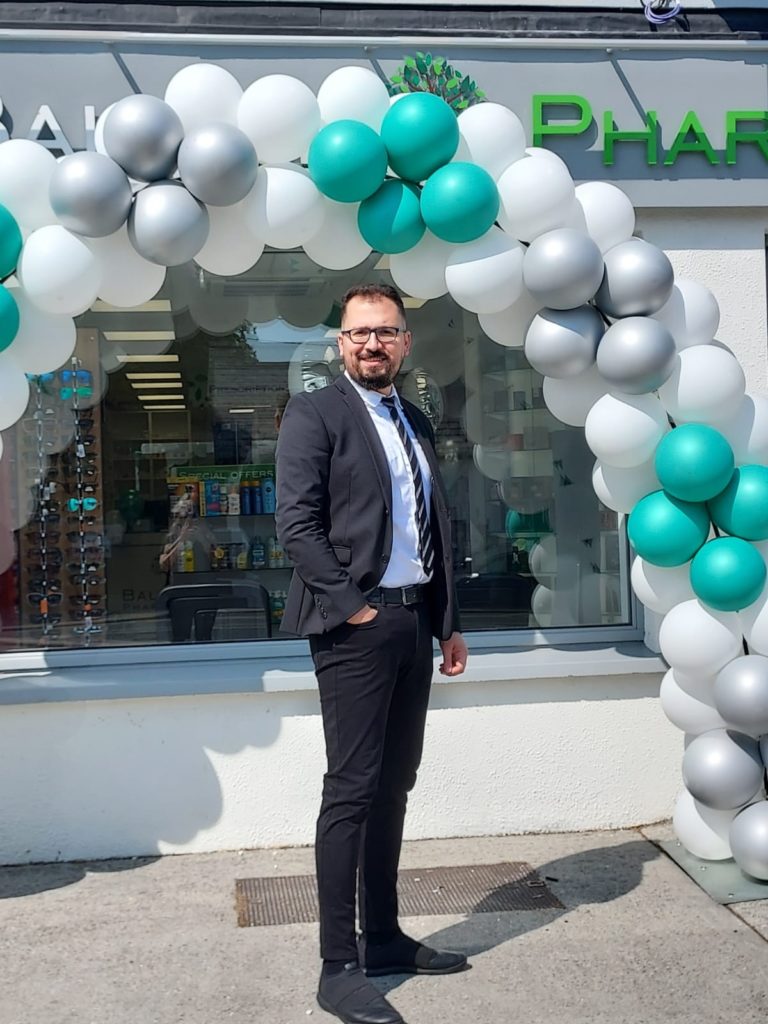 AN ESSENTIAL service in the heart of Ballon village opened its doors recently and has been welcomed with open arms.

Ballon Pharmacy, Main Street, Ballon is run by Fadi Almasri, who identified a need in the local community for a pharmacy, offering not only essential medical needs, but a wide range of products and services.

It’s been an extraordinary journey for Fadi, who fled war-torn Syria to arrive in Ireland under a resettlement programme in 2014 and since then has embraced his chance of a new life with both hands.

“I opened on 21 June and people have been so welcoming since,” said Fadi. “What so many people have been saying to me is that it’s so handy to have a pharmacy in Ballon. Now they don’t have to drive to Carlow or Bunclody for their medication, which is so important, particularly for elderly people. I think having things local, particularly during the pandemic, was never more important,” he added.

“I do feel that when you open a business in a community, you have a responsibility to that community, to be part of it and to help support the community,” said Fadi.

With this in mind, all three staff members at Ballon Pharmacy are from the local community. Fadi also offers work experience opportunities to local TY students and has supported both the local camogie and GAA teams by providing their first-aid supplies and sponsorship.

Ballon Pharmacy stocks an extensive range of hair care, skin care and essential baby supplies. The pharmacy also stocks a wonderful array of gift ideas, including jewellery and a perfumery selection. Men’s and women’s healthcare and toiletries are also among the range of items available at Ballon Pharmacy.

“We have 13 sections in the shop. I think it is very important to look after everything that people expect to have in a pharmacy and also supply things that are not currently available in Ballon,” said Fadi.

“We also offer blood pressure checks and check glucose levels. Every second week we have a chiropodist here and we support people and make them aware of dietary issues. We are also happy to discuss medication with people,” said Fadi.

Prescriptions can be filled in advance for returning customers, while Ballon Pharmacy also offers a delivery service after 6pm if customers require it.

Fadi is originally from Homs, Syria’s third-largest city. He had graduated as a pharmacist and was running his own pharmacy when the uprising against Bashar al-Assad began in 2011.

“I was open a few months before the war started, in a small village like Ballon, then suddenly one day I get a call to say don’t come back to the village, there’s been a bomb and everything is burnt to the ground. That was June 2011 and I’ve never been back since,” explains Fadi.

Fadi left his homeland for neighbouring Jordan; then in late 2014, along with his parents and two sisters, he arrived in Ireland under a resettlement programme operated by the UN Refugee Agency and the Irish government.

Following three months in the Mosney accommodation centre, the family were settled in Portlaoise. While there, Fadi met pharmacist John Paul Shanahan, who supported him in his training to become a pharmacist here and in getting to grips with the Irish system.

“That was the start of my pharmacy journey in Ireland – a journey which would eventually bring me to Ballon,” says Fadi, who also thanks Leighlinbridge pharmacist Michael McCormack, where he spent time as a locum, for his support.

“Not everyone has the chance to start their life again. My first pharmacy went in the war, but now I have opened in Ballon and this is my future,” said Fadi.

Ballon Pharmacy is open from Monday to Friday, 9am to 6pm, with plans to extend these hours in the coming weeks.