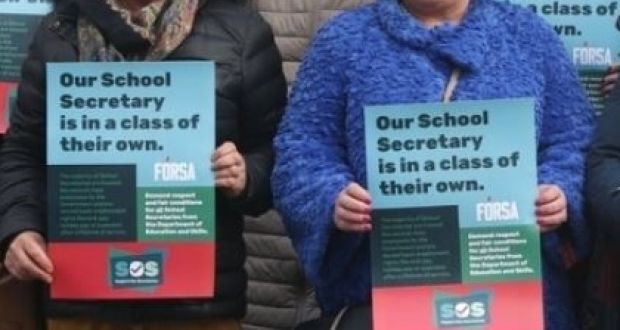 FIANNA Fáil TD for Carlow Jennifer Murnane O’Connor has welcomed news of “very significant progress” in discussions to resolve the long running dispute with school secretaries on pay and conditions.

“Planned industrial action for today has been suspended, thanks to very significant progress which has been made in resolving the long-running dispute with school secretaries on pay and conditions,” said deputy Murnane O’Connor.

“Thanks to my party colleague and minister for public expenditure and reform Michael McGrath, who has announced that focus has now moved to finalising and implementing details.”

Deputy Murnane O’Connor says that on entering government, ministers Norma Foley and Michael McGrath shared a common determination to definitively address the issue. The initial stage was to collate data on the number of secretaries and caretakers employed by schools and their pay rates. As schools are responsible for paying school secretaries and caretakers, it was necessary to collect data on the terms of employment. This data collection took a period of time to complete.

Following this, intensive discussions have been underway at the WRC in recent months. The department has now offered to align school secretaries’ pay rates to that of the clerical officer grade III pay scale within the ETB sector, subject to all elements of the claim being agreed.

The assimilation of school secretaries to the CO grade III pay scale will require further dialogue between the parties and an intensive engagement will take place over the next two/three weeks to allow this to be finalised. Pay rates will be pro rata according to a secretary’s current working pattern.

Planned industrial action on the part of Fórsa has been deferred, as all parties have agreed to resume intensive talks aimed at resolving the claim and agreeing a final package.

The department has also offered to improve the conditions for school secretaries with regard to sick leave, annual leave and maternity provisions for this cohort of staff. This will take place via direct engagement in the coming weeks in addition to engagement on other elements of the claim and subject to all elements being agreed.

“This is an important achievement by the Fianna Fáil party in relation to an issue that has been ongoing for many years,” said deputy Murnane O’Connor