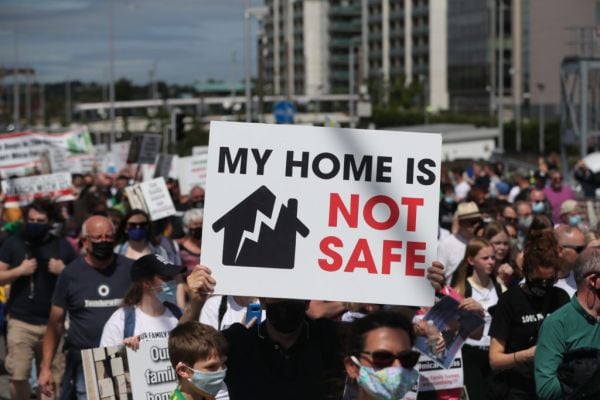 Several more counties are seeking to secure compensation for homeowners impacted by defective building blocks, the Dáil has heard.

Tánaiste Leo Varadkar said the problems caused by bricks containing excessive deposits of the minerals mica and pyrite have broadened beyond the two worst-hit counties, Donegal and Mayo.

Mr Varadkar said the Department of Housing has also received requests from local authorities in Sligo, Clare, Limerick and Tipperary to engage in the Defective Concrete Blocks Grant Scheme.

“I think it’s fair to say that this issue has broadened beyond Donegal and Mayo to many other parts of the country as well,” he said.

The Tánaiste made the comments as he was challenged by Sinn Féin’s Pearse Doherty to commit to enhancing the provisions of the scheme to ensure the state covered 100 per cent of the rebuild and repairs costs facing thousands of homeowners.

The Government has faced criticism for only offering 90 per cent provision under the scheme, leaving property owners facing significant bills to repair or rebuild homes whose walls are crumbling away.

An earlier scheme for homes in the Dublin and north Leinster areas provided 100 per cent redress for damage caused by excessive pyrite in material used to backfill property foundations.

The current 90 per cent scheme relates to mineral deposits in construction blocks.

Thousands of affected homeowners took to the streets of Dublin in June to demand 100 per cent compensation.

A working group set up to examine potential changes to the scheme is expected to report to Minister for Housing Darragh O’Brien at the end of this month, with the Minister then due to bring recommendations to cabinet.

“I know that nothing’s simple, I know the i’s have to be dotted and t’s have to be crossed and all of that detail has to be put down on paper,” he said.

“But there are countless, countless families that are suffering mental health pressures with anxiety and not knowing what the future holds for their families.

“That burden can be lifted off them today from you by recommitting that your government will provide 100 per cent redress to these families.”

The Tánaiste said the Government accepted that the scheme needed to be improved but he stressed any decisions had to be taken by government as a whole.

“We do accept that we need a significantly enhanced scheme, that is being developed at the moment,” he said.

“I can’t make any definitive commitments on that at present, that’d be a matter for government to decide before the end of the month.

“But I know the minister is committed to working with the homeowners to find a resolution to this problem and I accept the resolution is long overdue.”