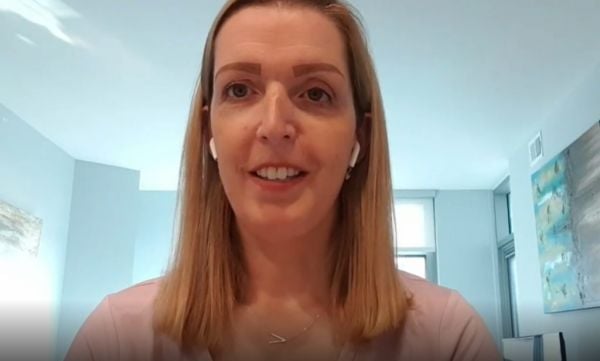 Ms Phelan said that while the treatment will not cure her cancer, it will shrink a tumour mass that is “dangerously close” to invading her vital organs, allowing her to “buy myself at least six months” before it will grow back.

The Kilkenny-born mother of two has been in the United States for a drug trial and will receive the treatment there, as it is not available in Ireland.

In a post on the ‘Vicky’s Tribe’ Facebook page, Ms Phelan said she made the decision to begin the therapy after a long process of applying for access to her medical records and getting the records to various hospitals in order for them to review her scans and medical history.

“Following a consultation at Georgetown University Hospital last Friday, I have been deemed eligible for proton beam therapy,” she wrote.

“The advantage of this type of radiation therapy over traditional radiation therapy, like external beam therapy, which is what I had seven years ago when I was first diagnosed, is that proton beam therapy reduces the damage to surrounding healthy tissue and vital organs which is absolutely critical for me since my tumour mass is VERY close to many of my vital organs.

“We do not have access to proton beam therapy in Ireland. Patients in Ireland have to go to the UK or elsewhere in Europe to avail of this treatment. And so, while I am still here in the United States, I wanted to see if I would be eligible to have proton beam therapy.

‘I may even get more than six months’

Ms Phelan said that while the treatment will not cure her cancer, it will shrink a tumour mass “dangerously close” to her vital organs.

“20 per cent shrinkage of a tumour mass that is dangerously close to invading my vital organs is good news!!!!,” she wrote in the Facebook post.

“AND I would buy myself at least SIX MONTHS before I would see this tumour mass growing back. Given how slow my tumours grow, I may even get more than six months… AND who knows what new treatments will become available in six months.

“Next steps are that I am booked in tomorrow morning to have CT planning scans done so that my team can map out my treatment. This process can take up to two weeks.

“Once a plan has been drawn up, treatment takes place over 5 weeks, 5 days a week Mon-Friday and then I will have a scan once treatment is finished to see how successful the therapy was.”

Ms Phelan moved to the US in January for treatment. She underwent a drug trial at the National Institute of Health (NIH) in Maryland.

She was diagnosed with cervical cancer in 2014 but was given the all-clear after prolonged and intense treatment.

However, three years ago she was informed that an audit carried out by CervicalCheck found that her 2011 smear test had been reported as a false negative.

Within weeks, a CT scan revealed the cancer had returned. The diagnosis was terminal. She went public with what had occurred and her efforts sparked a debate on the treatment and care of cancer patients in Ireland.

Ms Phelan has documented her journey in her award-winning book “Overcoming”.