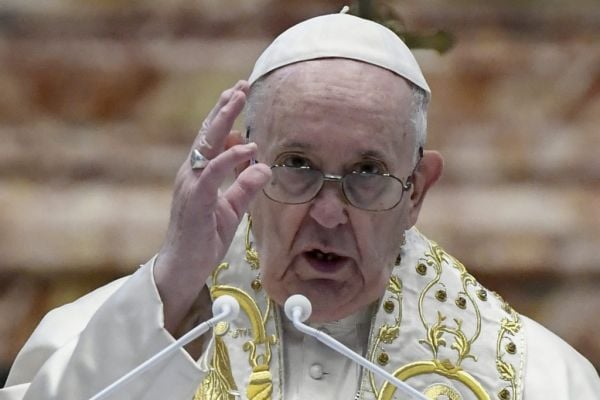 Pope Francis has described President Michael D Higgins as a “wise man of today” during an audience in the Vatican on Friday morning.

The Irish Times reports that the Irish President met the head of the Catholic Church for the fourth time on Friday and discussed issues including climate change, environment and global inequality.

During the formal photocall, the Pope said: “Today, I did not just meet a man, a President, I met a wise man of today.

“I thank God that Ireland has such a wise man as its head (of State).”

A statement issued by the Vatican said that after the audience with the Pope, President Higgins met with Cardinal Secretary of State Pietro Parolin, accompanied by Archbishop Paul Richard Gallagher, Secretary for Relations with States.

“During the cordial talks, various matters of mutual interest were discussed, such as migration and the protection of the environment, with particular attention to the prospects of the 26th United Nations Conference on Climate Change (COP26), to take place in Glasgow,” the statement said.

“There was also a joint reflection on the consequences of the coronavirus pandemic and the future of Europe, focusing finally on the theme of the strengthening of the peace process in the country.”

The President was accompanied to the Vatican by his wife, Sabina Higgins, and by Ireland’s Ambassador to the Holy See, Derek Hannon.

He presented to the Pope a ‘Bata Iascaire’ or ‘Fisherman’s Stick’ made from a local blackthorn stick on Inis Mór, the largest of the Aran Islands, by artist Lochlainn Cullen.

It comes as the President faces backlash at home from former taoiseach John Bruton, over his decision not to attend a religious service to mark Northern Ireland’s centenary.

Mr Bruton said the President should attend the event next month and claimed he appeared to have not sought the advice of the Government as “he is obliged to do under the Constitution”, while DUP leader Jeffrey Donaldson also criticised the President’s explanation for not attending the service.

On Friday, Minister for Foreign Affairs Simon Coveney said there was “consultation” between his department and the President’s team on the invite, but he insisted Mr Higgins made the decision not to attend.

“There was consultation between the Department of Foreign Affairs and the Aras on this issue and many other issues, but I can assure you President Higgins is the kind of person who makes his own decisions,” he said.

“He listens to all perspectives and then makes a judgment for himself.

“And, you know, he’s made his decision on this. He’s given an explanation as to the basis for that decision and I think we need to respect that.”

Last night, President Higgins broke his silence on the controversy, reiterating he would not attend on the grounds the event is political in nature and commemorates the “centenary of the partition of Ireland”. He also denied snubbing Britain’s queen.