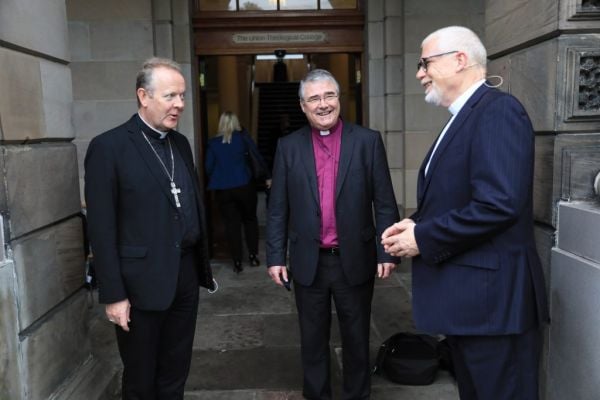 The head of the Presbyterian Church in Ireland has urged the preservation of powersharing government at Stormont, describing it as “precious”.

Dr David Bruce was speaking at an event organised by the church to mark Northern Ireland’s centenary.

The Presbyterian moderator was speaking after Mr Donaldson warned that his party’s ministers could withdraw from the Executive if the UK government does not take action over the Brexit Protocol.

“The powersharing arrangements which exist here, while not by any means perfect, are precious,” he told those assembled.

“They are a table around which we will find political friends and foes, and that in itself is a prophetic instrument which we need to protect.

“That said, the right to argue for an important principle belongs to all our elected representatives – that is after all, why we elected them.

“Such actions do not serve us well, or build confidence for the future.”

Dr Bruce told the politicians: “We support you in your work – and that support transcends the divisions of party or even ideals you may espouse”, but urged “gritty determination”.

He added: “North, south, east and west on these islands present us with a web of opportunities to grow – economically, culturally, spiritually, if we have the vision for it.

“We must work tirelessly to sort out the new configurations of our cultural, commercial and spiritual connections.

“No shortcuts. No quick fixes. No buck-passing. Just gritty determination to get it done.”

Looking to the future, Dr Bruce said while Presbyterians may have historically been regarded as “thran” or dissenting, the denomination is “respectful in the face of difference”.

He added: “We recognise the important benefits of a shared space, and that our vision for the future means that a Presbyterian can feel equally at home in the Gaeltacht, as they can in the Braid – and equally (with hope for the future) call both of them ‘home’.”