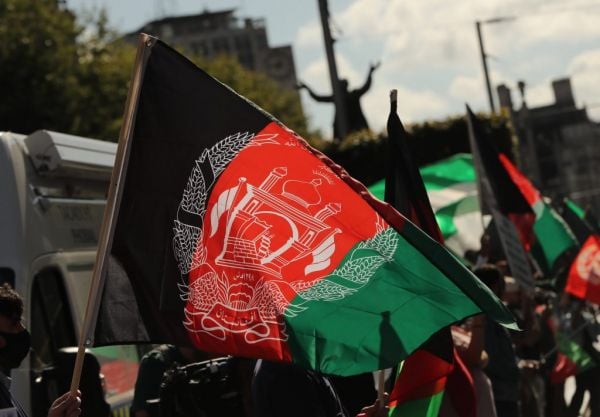 A protest has been held in Dublin over the policies of the Taliban regime in Afghanistan.

Many Afghan-Irish people gathered outside the GPO in Dublin in opposition to the Taliban’s hardline policies, particularly against women.

The protesters have called on the Irish Government not to recognise the new Taliban government and to use their influence on the UN Security Council to help people in Afghanistan.

Many of the demonstrators moved to Ireland when the Taliban first took power more than 20 years ago, and most have family members who live in Afghanistan.

Sajad Bakhshi is a member of Ireland’s Afghan community and moved to the country 20 years ago.

“Now unfortunately the regime has taken over again. It’s a cycle and I am here to protest as I have family left there,” he said.

“I may sound Irish and act Irish but my skin and blood will always be Afghan and I am here to protest for the Afghan people.

“My message is for the females of Afghanistan, please keep strong and don’t stop now.

“Please keep your strikes up and we are with you. We condemn the brutality of (towards) females.”

“We are Afghan Irish nationals living in Ireland and we are here to raise the voice of those who are voiceless in Afghanistan and that includes men, females and girls.

“Particularly females who have been affected by the hardship,” she said.

“In the space of a week, people’s lives turned upside down. Once the Taliban regime comes in everyone is forced into this miserable life they lived two decades ago.

“All my mam’s family live in Afghanistan and worked in the government and civil servants and had good jobs.

“Now everyone is at home and have no idea of what is going to happen next.

“Do not lost hope, we have technology on our side now two decades on, they will not get away with it.

“We do not want Ireland to recognise the Taliban as a government.”

Catherine Kennedy, the principal of St Vincent de Paul Infants in Marino, Dublin, said the Government should use its influence on the UN security council.

She added: “As an Irish woman, Irish principal, trade unionist who is passionate about education and recognises that education is a fundamental right for every human being wherever they are, that’s why I am here to support the Afghan women.

“It’s disgraceful the so-called government, Taliban drug lords, who are denying the Afghan women their fundamental right to education, only men and boys are allowed.

“They have eradicated female and girls from education. I want the Afghan women to know they have our full support.”

Afghan journalist Sayed Farid Sanai said: “What is going on is unbelievable.

“We had good freedom of speech and could say the truth but now since the Taliban took over, we don’t have anything, no peace, no free speech.

“For Afghan journalists it is tough, they can’t talk about the reality and they need to keep silent otherwise they will be killed.”