For the fifth in the last seven years, Mount Leinster Rangers and St Mullins are the last two standing in the Carlow GAA Senior Hurling Championship after both came through their respective semi-finals.

If St Mullins are to topple the champions on Sunday they will have to play to the maximum of their ability. The big issue for St Mullins is where to play James Doyle. In their run to the Leinster final two years ago Doyle was one of the club’s leading play makers up front but since then he has been plying his trade with Carlow at centre-back. St Mullins have moved him around the place in this year’s championship and it will surely not be lost on the management team Doyle didn’t score at all on Sunday against Bagenalstown Gaels. 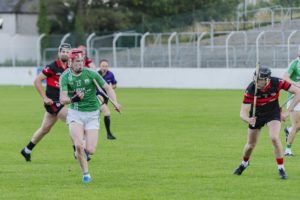 Paddy Boland’s 1-2 from play on his introduction will surely see him get a starting place on Sunday where he and Marty Kavanagh seem to be playing well off each other.

At the back the St Mullins defence have been asked questions all season which probably explains why they can’t make up their mind about where to put Doyle.

Gary Bennett, Paul Doyle and Cathal Connolly were too good for the Bagenalstown forwards on Sunday but they are facing a different challenge with Rangers.

Chris Nolan was well shepherded on Sunday against Naomh Eoin where Ross Smithers and Michael Kavanagh minimised the potential damage the full-forward would cause. Yet Nolan still picked off 0-3 from play and had a hand in some of the other scores while drawing the frees which Denis Murphy converted.

Rangers have no weak areas. Just some points where they are not as strong as in other areas. Perhaps St Mullins will look to one or two positions where they might feel Rangers are vulnerable. Rangers full-back, David Phelan, has been a massive servant for his club and played in the 2006 final. The saints will surely test his pace early on. At midfield Fiachra Fitzpatrick will be playing in his first senior test. It would be naïve to think he will not be asked a question. So far in the championship the young man has shown maturity beyond his years in a key area. Yet a final is a final. It can pass you by while some of the lesser known (?) players can make county final day their own.

It is impossible to vote against Rangers. Possibly the chemistry between the two clubs will level matters a tad. St Mullins with nothing to lose and a proud history against a side who have contested fifteen out of the last sixteen finals. It makes for a fascinating day.

For those who can’t make Netwatch Cullen Park for the game, it will be screened live on TG4.