CARLOW’S Tom Daly will make his 50th Connacht appearance when the province play their first United Rugby Championship game of the season away to Cardiff on Friday evening (kick off 7.35pm). 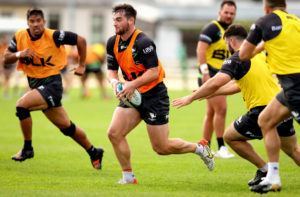 Daly is partnered in the centre by Tom Farrell, who is starting his first competitive game since last November after a serious knee injury.

After a two-try performance for the Eagles last week, new signing Mack Hansen has been handed his Pro debut after he was named on the wing. Fellow Aussie John Porch is named on the other wing with Tiernan O’Halloran operating at full-back.

Club captain Jarrad Butler is named at number 8 alongside flankers Cian Prendergast and Conor Oliver, while Oisín Dowling and Ultan Dillane start together in the second row.

The starting line-up is completed by hooker Shane Delahunt and props Matthew Burke and Finlay Bealham.

There’s also a potential debut off the bench for Hubert Gilvarry. The scrum-half has represented Sligo RFC and Sligo Grammar School and has been integrated in the Pro setup the last number of weeks.

“It’s been a really productive pre-season campaign so we’re all looking forward to this URC opener. It’s a difficult opening game as Cardiff are always a formidable outfit especially at home, but we’ve prepared in the right way and are confident we can put in a really strong performance.

Mack Hansen has been very impressive since arriving so fully deserves his first start, and in Hubert Gilvarry we have another Connacht native ready to make his debut if called upon. I know his inclusion in the matchday 23 will be a very proud day for all at Sligo RFC and Sligo Grammar School.”