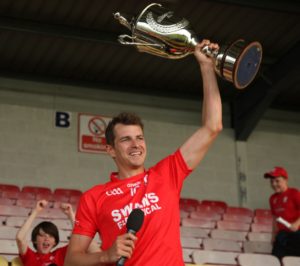 The bottom team in the group 1 of five is automatically relegated.

The top team in each group goes through to the semi-final draw with the second and third placed teams criss-crossing to play two quarter-finals. The bottom team in the group of four play the second last placed team from the group of five with the loser being relegated.

Players in and out: Should be picking from a familiar looking squad without too many changes.

Form: Unlike other clubs such as Rangers and Ballinkillen/Fenagh the newly formed Gaels seem to draw inspiration from their hurling success where they qualified for the senior semi-final and won the under 20 championship.

Prediction: They will make the knock-out stages with a bit to spare.

Players in and out: Bobby Daly won’t be playing senior football but whether the great man has fully retired is another story. Michael Jackson and Liam Ryan, who missed the intermediate final, are back. Former Carlow minor Ronan McAllister, who was away, is available now.

Form: They played SFL 2 in the summer months beating Fenagh but losing to Éire Óg’s seconds and drawing with Tinryland. They needed to be up in SFL 1 which would have been more in line with their ambitions.

Prediction: Their opening game against parish rivals, Old Leighlin, couldn’t come at a better time for the promoted side. A win here when sides are only getting going could give them momentum and another two points out of their next three games will see them into the knock-out stages in a five team group.

Players in and out: No change from the 2020 winning squad.

Form: All good things come to an end but at this stage it is impossible to see who is going to deny them an historic five in a row titles. Rathvilly pose the biggest threat and even then Reds confidence will be sky high after coming through the group unbeaten.

Form: Rangers are infuriatingly unpredictable. They qualified for the semi-finals in 2020 but were well-beaten by Éire Óg. At least they can concentrate on football now that the hurling championship is over.

Prediction: Rathvilly is the only team they have to fear in the group. After that two wins out of their other three games should see them make the quarter-finals.

Players in and out: Daryl Hayden is out but Jamie Ayres, Milo Feehan, Ciaran Timmons and Kealan Geoghegan have all come up from minor and are settling into the senior panel.

Form: A big defeat to Palatine in the league quarter-finals doesn’t bode well but they are probably a lot better than that when it comes to the championship.

Prediction: Their clash with Tinryland will define their season. They could make the quarter-finals with a win in that game.

Captain: David Bambrick is captain and Niall Roche is vice

Players in and out: Cathal Coughlan is injured and is more than likely out for the season.

Form: It has been difficult to get a full-preparation for the championship as 10 of the panel were hurling with Naomh Bríd who were in the intermediate final. In the league they were well beaten by Éire Óg last July after a good start at Teach Asca.

Prediction: They may struggle in their opening game and there is nothing easy after that. They could end up fighting to avoid the drop.

Players in and out: No major injuries with the same panel as for the 2020 championship

Form: Semi-finalists in 2020 and but for the concession of a goal early in the second half they could very well have gone on and beaten Rathvilly.

Prediction: They will emerge from the group comfortably enough but if they are to be beaten Rathvilly and Éire Óg are the only teams who will do so.

Players in and out: Dara Curran, Conor O’Neill, Luke Coleman and Padraig Byrne have come into the senior squad and all is good after that.

Form: They won the league final but Éire Óg edged them in the 2020 championship final. A lot of good things are happening in the Wicklow border club. They are contenders.

Prediction: This year may be a bit soon but if they get Éire Óg when they are not 100% right they will beat them. They don’t need to be told Palatine are a bit of a bogey side for them.

Manager: Steve O’Meara who has worked with Corofin, Galway and Carlow footballers is at the helm.

Players in and out: The are picking from the same panel as last season

Form: Kildavin-Clonegal knocked them out of the division 2 league this year and there is a worry a once famous club are struggling to maintain their senior status.

Prediction: In a teak-tough group it is hard to see them avoid relegation this year.

Manager: Liam Kennedy from Carnew has been appointed.

Players in and out: In addition to some of the more experienced players, Clonmore continue to build around the team that reached the minor final in 2018 and who went on to take the under 20 B championship a year later.

Form: In last year’s intermediate championship they were narrowly beaten 0-9 to 0-6 in the quarter-finals by Ballinabranna who, despite the long gap to the semi-finals, went on to lift the title.

Prediction: They will do well to get something out of the Kildavin-Clonegal and Naomh Eoin games so their progress to the knock-out stages could depend on how they approach the Éire Óg test. They could end up on the relegation play-off.

Players in and out: There are a few injury worries. Sean Murphy played with Ballinkillen in the hurling championship and these games will do him the power of good as the football approaches.

Form: League form has been iffy. They lost to Éire Óg and Ballinabranna but beat Mount Leinster Rangers.

Prediction: They should qualify from the group but it gets more difficult from there.

Manager: Keith O’Hara from Bunclody is in his second year

Players in and out: There is a big worry about injuries to brothers Gary and Kieran Nolan. After that the panel hasn’t changed from last year.

Form: They were well beaten by Clonmore in the league but when push came to shove against old rivals, Kilbride, they came out on top after a tight first half. They didn’t make the knock-out stages of the competition. They also lost by a single point to St Patricks away from home in a cracking game.

Prediction: They will progress from the group but may not go any further.

Players in and out: Kilbride continue to play with a small but determined group of players. Tom Donald comes into the squad now.

Form: Heavy defeats to St Patricks and Fighting Cocks in the league don’t bode well for them. Championship is light years away from league games played months ago but Kilbride could struggle this year.

Prediction: They could end up in the relegation spot.

Captain: Owen Roberts and Ronan Brennan are joint captains. Cillian Redmond is committing to rugby and is not like to be available. After that everyone is back from last year.

Players in and out: Cillian Redmond has committed to rugby but he could become available at some stage. At the end of last season it looked as if Daniel St Ledger was not going to play but he came on in the final. It would be a surprise if he lines out this year but it was somewhat something of a surprise when he featured in that 2020 final.

Analysis: Two defeats in two consecutive finals hurt but St Ledger coming in as manager and bringing in Turlough O’Brien as an adviser is a great move for the club.

Captain: Not selected yet.

Players in and out: Jack Kavanagh and Eoin Redmond are doubtful and it is hoped young players such as Diego Dunne, Jamie Behan and Scott Tracey can bring their undoubted talent at underage age up into the adult ranks on a consistent level.

Form: The club are only getting back into football training after concentrating on hurling since the restrictions were eased. Even last week Naomh Eoin were in the intermediate hurling final which further interfered with the start of the football training.

Prediction: They are hugely inconsistent. The Clonmore game will be key and they could win this one. Quarter-finalists at least.

Players in and out: No player movement of note.

Form: Going into the junior A final last year they were firm favourites to beat Tinryland but, in a tight game that went all the way to the wire, their rivals couldn’t buy a break and the Slaneysiders made them pay with two late goals. They showed battling qualities when beating Fighting Cocks by a single point in the league.

Prediction: They are in a wide open group. They could eke out one win which would save their intermediate status and get them into the knock-out stages.

PROFILES ONLY ON THE FIRST TEAM IN EACH CLUB

Form: League form was inconsistent. They took a nine point beating against Grange but beat Leighlinbridge and Old Leighlin in tight games.

Prediction: They will have to bring their A game to the Rathvilly and Tinryland challenges in particular. One win is enough to ensure their safety but where will it come from?

Players in and out: James Hickey, Diarmaid Burrows and Luke Nolan have come up through the underage structure while Luke Decaux has joined his brother, Matt, on the panel.

Form: Including comprehensive wins over Ballon and Leighlinbridge they showed some decent league form. Write them off at your peril.

Prediction: They could top their group and put themselves write in with a great chance of overall glory.

Players in and out:

Form: League defeats to Rathvilly and Ballon asks questions. Yet they are a side who go into every championship with optimism which is always worth a few extra points.

Prediction: They are in a tough group. It will be touch and go as to whether they can get the win which will assure them of a place in the knock-out stages.

Captain: Joint captaincy Bryan Jackson and John Dwyer but Jackson has incurred a serious knee injury which is going to keep him out of action for some time.

Players in and out: Defender, Brian Hosey has plenty of experience which will surely help the younger, Steven Fennell at full-back. Jimmy Phelan, Shane Coakley and Ben and Jamie Doorley will back-bone their challenge.

Form: The Sky Blues with a solid group of young and experienced players are close every year. They could head the group which would see them into a semi-final.

Prediction: The other side of the championship is strong so it is a big ask to go all the way. They won’t be far off though.

The top team in each group goes through to semi-final draw with the second and third placed teams criss-crossing to play two quarter-finals.

Captain: To be Selected

Players in and out: The club has entered a team in the football championship for the first time in many years. No doubt they will have a number of players who hurled with the club in the senior, under 20 and junior championship.

Prediction: Hard to know but they will come out of the group and will be JFC C contenders.