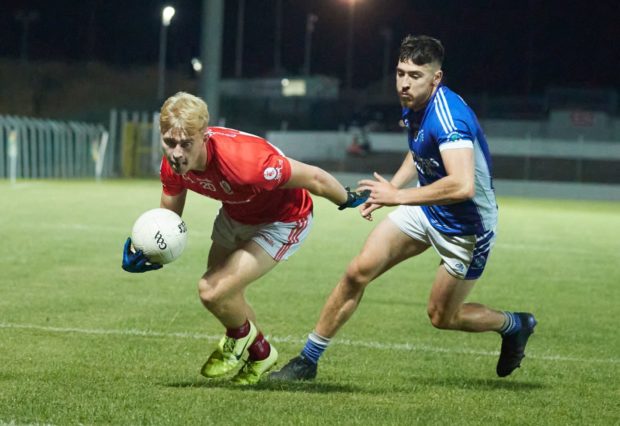 EXCEPT for a brief spell in the first quarter was this senior football championship group 2 first round game any more than a procession as the reigning champions got over their town rivals with the minimum of fuss.

Cormac Mullins and Adam Murphy points had the Teach Asca boys two clear in three minutes and then O’Hanrahans enjoyed a period in the ascendancy as James McGrath converted a free and Mark Davis levelled on eight minutes. When Leigh Walker rifled over a 35 metre point it looked as if The Blues had thrown down a challenge. The lead only lasted about a minute as Éire Óg put together one of their now familiar passing movements and Ross Dunphy tipped to the net at the scoreboard end of the ground.

Simon Doyle notched an O’Hanrahan point but it was looking ominous for the outsiders when their goalkeeper, Jamie Hennessy, began to see more of the ball and had to  produce excellent saves from Jordan Morrissey and Dunphy.

Éire Óg turned the screw. Darragh O’Brien, with a free, and Morrissey from out the field both raised white flags. Dunphy scored his second goal when he sent his marker the wrong way with a superb dummy and change of pace. His finish off the left-hand post matched his magic in the lead-up to the goal.

O’Hanrahans needed to get to the half-time whistle as quickly as possible but when a short kick-out went wrong Chris Blake delicately beat the retreating goalkeeper for an opportunist finish. At the break Éire Óg led 3-5 to 0-5 and one feared for O’Hanrahans.

Those fears were realised as the Reds had a Recce Denieffe point straight from the throw-in. Sean Gannon also pointed and Adam Murphy scored a goal on 33 minutes.

A bemused O’Hanrahan side had no answers. Yet they applied an element of pressure which yielded three McGrath frees. That effort must have sucked the energy out of their limbs as Gannon took a pass from Morrissey to score another goal.

With time running out the captain was afforded space which he will hardly ever experience again. He made full use of it and romped in for two more goals. It was too easy. It will hardly help Éire Óg as they go for five in a row while one fears for O’Hanrahans after this mauling.