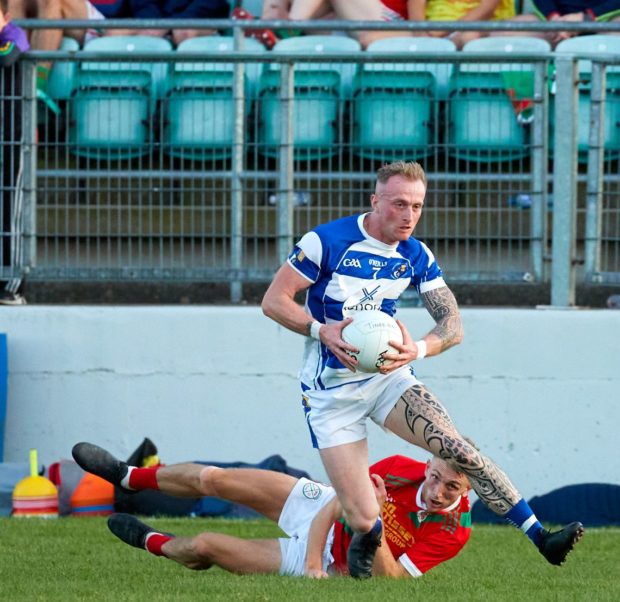 PALATINE justified the favourites tag when they came through a strange encounter with their parish rivals in this senior football championship group two game at Netwatch Cullen Park on Saturday.

Almost from the throw-in,  Tinryland drew first blood when Diarmaid Walshe converted a free. Thomas Sheehan levelled  and by the 12th minute the sides were tied at 0-3 each. Palatine got a run on their opponents hitting three points without reply to take a 0-6 to 0-3 advantage to the water-break.

It was a tame enough affair with neither side unwilling to take chances preferring to sit back and try to spoil the opposition ball carriers. Tinryland coughed up possession far too many times either shooting wide from far out the field or failing to find a supporting player with the pass.

The only goal chance of the half fell to Conor Lawlor on 24 minutes when,  in shades of his stunner against Kildare in Tullamore some years ago,  he drove forward. This time with the keeper frantically coming out the full-back settled for a point. It was a let-off for Tinryland and by the half-time break Palatine led 0-7 to 0-5.

After Keelan Gaffney narrowed the gap with a point just after the resumption, there was a goal opportunity for both teams. First of all Tinryland produced a quick fire movement but the final pass to substitute, Ronan Curran, was overcooked and the chance was lost.

Immediately at the other end Conor Crowley failed to find the net when it looked easier to do so.

As the game unfolded, Niall Lowry scored a Tinryland point to leave only one between them. Sensing danger Palatine rose their game for a spell with Jamie Kenny adding a point. The only goal of the game came on 41 minutes when Cathal O’Neill finished to the net after he had been put through by Conor Crowley.

From an urgency point of view  the game died from there while Gavin Healy had to leave the field after taking the full force of an attempted shot by Thomas Sheehan caught him full in the body. It was that kind of game. Moments to be forgotten. Then moments to remember. Particularly the final score of the game when another substitute, Palatine’s Bryan McMahon, sold an outrageous dummy to his marker which gave him all the time in the world to slot a left-footed effort over the bar at the scoreboard end of the ground.

Then there is the case of Palatine net-minder,  Cormac Holloway,  who was called into action because of an injury to regular goal man, Craig Kearney, He did nothing wrong all through and made a few nice intercepts. No doubts, Cormac will remind all his team mates and the returning Kearney that he kept a clean sheet. Then again,  he wasn’t tested too much either by the Tinryland attack who were without intercounty man, Paul Broderick.

For the two sides they are facing different tests over the next few weeks. Tinryland are looking at possible  relegation while Palatine will be preparing for further games which will cement their place in the knock-out stages of the championship.