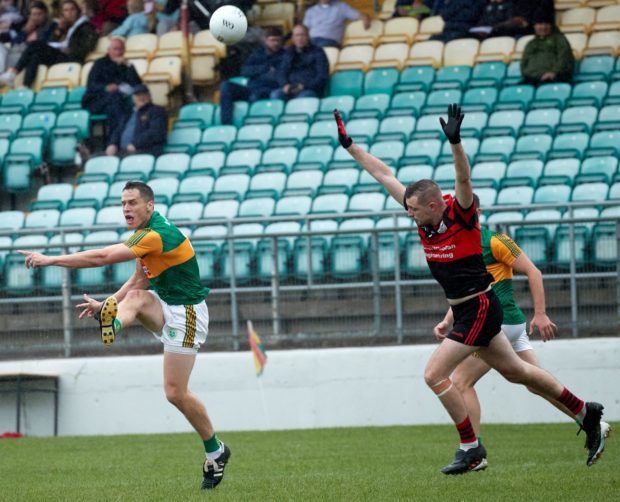 A late rally almost produced a sensational result in this first round senior football championship tie at Netwatch Cullen Park on Sunday.  Having won the senior hurling final only seven days earlier it was always going to be difficult for Rangers to transfer the necessary energy into a first round football championship game at Netwatch Cullen Park. Yet at the end as Rathvilly relaxed it was Rangers who very nearly stole a draw. Another minute or two and the favourites could have been having to come to terms with an embarrassing result.

The Borris side can be tricky opponents though and Rathvilly would have been aware of that. They showed due diligence early on. The defeated 2020 finalists hit the ground running and Brendan Murphy pointed on 16 seconds. His brother, Brian, also found the posts and on three minutes Kevin Murphy  landed a point.

For Rangers, Diarmuid Byrne converted a free but they were the authors of their own problems as a number of chances were missed.  In football terms it was criminal to see a number of shots fall into Rathvilly keeper, Tom Pilkington, who set up his defence to come back out with the ball.

Rathvilly punished their rivals and two frees from Brian Murphy saw them take a 0-5 to 0-1 lead to the first water-break.

That advantage was extended with the Murphy brothers both landing further scores. It didn’t help the entertainment factor for the small number of spectators who attended that the rain came down and in no time at all everyone was sodden. Mistakes followed with Rangers shooting a number of wides while Rathvilly moves were broken up relatively easily. One minute of injury time was a blessing of sorts in what was becoming an endurance test for players. The 0-7 to 0-1 Rathvilly lead was a good indication of the direction the game was seemingly going.

Three minutes into the second half Brian Murphy drew a penalty and got up himself to shoot the resultant spot-kick to the left and wide of the keeper who never had a chance. Coming towards the water-break Rangers gave a hint that they were not going to be overrun when they enjoyed a good spell.  Diarmuid Byrne converted a free and picked off another from play. Brian Smith replied for Rathvilly with a wonderful 40m point.

Then came the drama when Rangers were awarded a 13m free.  Diarmuid Byrne went for goal. The massed defence blocked his effort but an alert Jon Nolan picked up the loose ball and from the edge of the square he unleashed a rocket which flashed along the ground and into the bottom left hand corner of the net.

It was game on but Rangers then lost their leading scorer to two yellow cards and from there their chance seemed to have evaporated. Rathvilly worked the ball up the field and while they registered a wide they were in the right place to see out the game. Even then they were unable to impose themselves on the encounter.

Instead Rangers finished on a high and forced a 14m free. Eddie Byrne had to go for broke.  A packed defence knew that too and lined the goal. The shot was fierce but an outstretched arm deflected the ball over the bar. That is how it finished. From a position of utter dominance  Rathvilly  were nearly undone by Rangers who sniffed a chance and just about failed to take it.