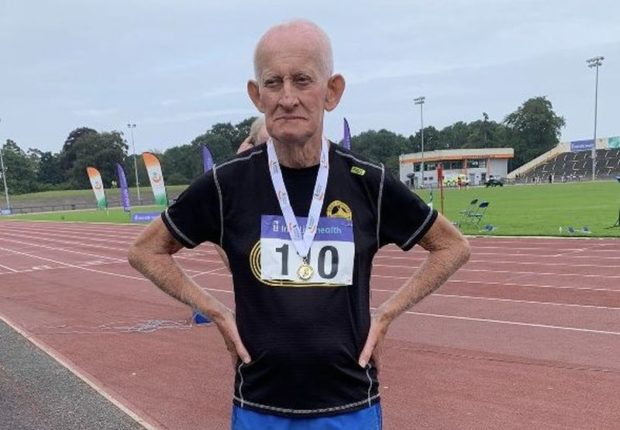 SEAMUS Mallin is a native of Templeowen, Tullow, Carlow. He was born in 1937 and
attended the Patrician Brothers school. Throughout his life, Seamus has
been a keen sportsman. Seamus played hurling and minor football for Tullow
in 1954 and won two junior hurling championship medals in 1961 and 63.
When he worked in Bagenalstown, he was Secretary of the GAA club, Erin’s
Own.

Seamus married Eileen (née Convery in 1971). Their son, Niall, and wife
Fiona are proud parents to twins Sarah and Michael.

His interest in sport diversified to running in the 1980s, the dawn of the
marathon boom. With the Dublin club, Dundrum AC, he competed in his first
marathon in 1981, completing the course in 3:54. Four years later and eight
marathons later, Seamus competed in his last marathon, taking nearly an
hour off his first time in a lifetime best of 3:05.

Over the years, he continued to run until his 70s and a brush with cancer
in 2014. Numerous radiotherapy treatments and four bouts of chemotherapy
later, Seamus in now in remission. In the summer of 2021, Seamus got in
touch with Bray Runners AC where he now lives. He quickly impressed with
his turn of speed. The club suggested that he compete in the National
Masters Track & Field Championships, scheduled for 5 September. As well as
his weekly gym schedule and runs around his local roads, Seamus turned up
for training every Thursday evening and every Saturday morning at the track
in nearby Greystones. The only thing that stopped him was a bout in
hospital for cellulitis and a minor hamstring niggle.

The day dawned and Seamus looked forward to his two events: 100m dash and
400m in the M80 category. The sun shone all day long and there was a
tangible atmosphere of excitement in the air as master athletes gathered to
compete and chat. For many, it was the first time in a long time to see
each other.
Sure enough, Seamus won gold in both events, including a personal best in
the 100m of 28.6 seconds. The women’s relay teams, lined up in the call
room area, roared Seamus to the finish in the 400m, a really inspirational
moment.