IF Mount Leinster Rangers are to repeat their 2013 Leinster Hurling Championship heroics they will have to do it the hard way after the draws for the 2021 Leinster Club Championships were made last night.

Rangers, who won their tenth Carlow title last month by beating St Mullins in the final, were drawn to face the Kilkenny champions in a home tie on 28 November. 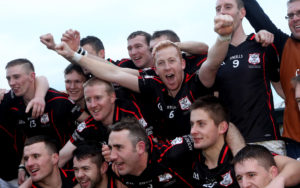 Richard Coady celebrates Mount Leinster Rangers’ Leinster Championship final win in 2013 but they face a difficult pathway to get back to that level this year
Photo: ©INPHO/James Crombie

Unlike the Carlow championship, Kilkenny’s Championship is still very much up for grabs and reaches the quarter-final stage this weekend. Eight-time All-Ireland champions, Ballyhale Shamrocks, who beat then Carlow champions St Mullins in the last Leinster final played in 2019, remain right in the mix for the Kilkenny title.

By the time of the game, Rangers will be over two months without a competitive game, whether that rest proves to be an advantage or not remains to be seen.

Should Rangers come through that game, things won’t get any easier as they will face the Offaly champions in the semi-finals after their last two Leinster campaigns ended at the hands of Offaly opponents, Kilcormac/Killoughey in 2017 and Coolderry in 2018.

On the football side of things, on paper at least, there would appear to be a slightly easier pathway to the latter stages of the Leinster Senior Championship. Carlow’s champions will travel to play the Louth champions in the first round and should they come through that they will have a home tie in the quarter-finals against Wexford opposition.