CARLOW Olympian, Marcus Lawler, is changing coach. He and his mother, Patricia, who is also his coach have decided to adapt a new approach and Marcus will now be coached by Shane McCormack. The Waterford based coach has the current 100m and 200m record holder, Phil Healy, under his wing.  Marcus says he and his mother made a mutual decision. 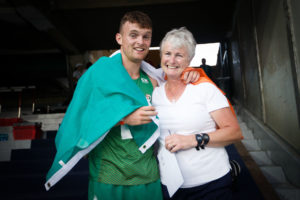 The 2019 World University Games in Naples, Italy has been one of the highlights of Marcus Lawler’s career which he shared mother and former coach Patricia
Photo:©INPHO/Tommy Dickson

After coming back from the Tokyo Olympics Marcus took a break to re-charge his batteries. He has only been back training about a week now. During the break the pair had fresh discussions about where Marcus was at and how he could get more out of himself. By arriving at this point, Marcus accepts it is a changing of a hugely successful sporting partnership and a mother-athlete relationship which was quite unique. The possibility of changing coach was a topic which the pair had broached already.

“It was not really emotional as such. It was a mutual thing. At the end of the day all we are trying to figure out how we are going to get better. It came a year delayed because Tokyo was delayed because of Covid. I didn’t want to change anything then. We held on for another year,” explained Marcus.

“At the end of the day Mam got me to run 20.40. The Irish record is 20.30. She got me to a World University Games bronze medal and and to an Olympics. Now it is up to Shane to sort out and help me to better that. That is what I want him to do,” Marcus explained.

The hugely successful Carlow athlete accepts it is up to him to run faster but says a change of coach can help.

“It is up to me but I am the one who is going to be guided. I am the one who runs between the white lines. What I hope is brought to the table is a fresh voice, a fresh programme and a programme which will challenge me in a way which I wasn’t challenged before.

“Something different like modes of training.  His (Shane McCormack) philosophy will be different than Mammy’s.  In ways that will challenge me in a different way. Hopefully, that will bring out the best in me,” suggested Marcus.

The 2020 national champion and former schools All-Ireland winner is ranked third in the all-time Irish 200m list. His bronze medal in the 2019 World Universities Student Games is a career highlight. He wants to build on his former achievements. There is even the possibility of going up in distances.

“It is early days and I cannot really call anything. He was the man we decided to go to. We (Marcus and Patricia) felt this was the best choice for me. He has done a really good job with Phil Healy. He brought her on really well in the 200 and 400.

With the Paris Olympics just three years away McCormack and Lawler have time to build a coach and athlete relationship.

“It gives him time to get to know me. This year will be an exploration and when we start (competitions) next year (2022) he will have a good idea about me.”

Lawler’s first test will not come until after Christmas when the indoor season starts.

“I will have three months under my belt with Shane so it will be interesting to see where I am at after those three months,” speculated Marcus.

There have been many great days in the past with his former coach. Now mother and son are ready for a new chapter in their lives.

“Mammy has done a great job and we made the decision together so that I could get better. She wants me to get better and that is what it is all about. We are constantly progressing and every decision I make is about trying to get better,” the Tinryland athlete confirmed.