Daly retains starting position as Connacht take on the Dragons

CONNACHT have made three changes to their starting XV for Saturday’s Saturday’s URC meeting with the Dragons at The Sportsground (k/o 5.15pm) but as expected Carlow’s Tom Daly retains his place at centre. 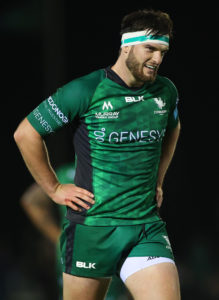 Matthew Burke, Paul Boyle and Ben O’Donnell have been drafted into the starting team. It’s a first appearance of the season for O’Donnell, who forms an exciting back three with winger Mack Hansen and full-back Tiernan O’Halloran.

The remaining backs are unchanged for the third straight game, with Kieran Marmion and Jack Carty at 9 and 10 respectively and Tom Farrell alongside Daly at centre.

Ballinrobe man Matthew Burke comes into the front row with Dave Heffernan and Finlay Bealham, while locks Oisin Dowling and Ultan Dillane also start together for the third week in a row.

The side is completed by flankers Cian Prendergast, who Carlow links in his family, and captain Jarrad Butler, with Boyle wearing the number 8 shirt.

“Last week was very pleasing not just because of the result, but the performance gave everyone the confidence that we’re heading in the right direction. We know more than anyone that we now need to replicate that level consistently. Dragons are a tough team to play against and showed that against Leinster last week, so we’ll need to be at the top of our game.”