CARLOW’S Lauren Dwyer and Kylie Murphy face familiar opponents tomorrow in the EVOKE.ie FAI Womens Cup semi-finals as they look for a return to the final of a competition where they have enjoyed a lot of success in the recent past. 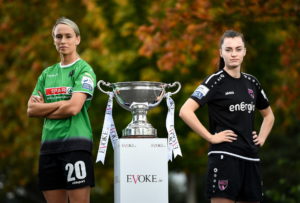 It is the fourth successive season that their Wexford Youths team have been paired against Peamount Utd in the latter stages of the cup. Both Murphy and Dywer featured when Wexford beat Peamount in the 2018 and 2019 finals, Murphy was captain on both occasions, but they were denied the chance to go for a three in a row when they were beaten by Peamount at the semi-final stage last year. Peamount went on to beat Cork City in the final to complete a league and cup double.

Barring a late collapse, Peamount look set to retain their league title but Wexford will be hoping to prevent another double. The league games between the teams have been extremely close so far. Peamount beat Wexford 1-0 in Ferrycarrig Park in just the third game of the season back in March and since then the sides have played out a 2-2 draw in Peamount in June and a 1-1 draw back in Wexford in August.

The game takes place in PRL Park at 4pm on Saturday with the other semi-final between Shelbourne and Galway scheduled for 2pm in Tolka Park on the same afternoon.

Both games are available to watch on LOI TV.