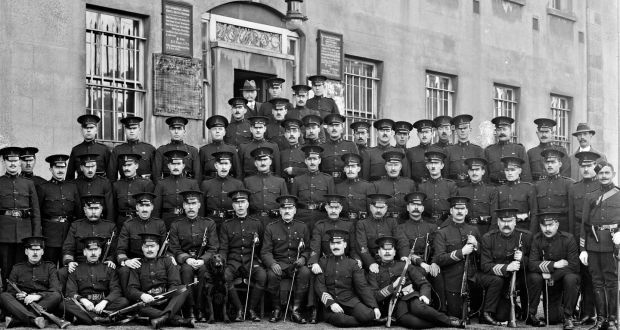 Members of the Royal Irish Constabulary (RIC) in Waterford in 1917 Photo: A. H. Poole Collection

An upcoming talk will look at the Royal Irish Constabulary’s (RIC) policing in Carlow during the War of Independence.

Historian Adam Kane will give a talk entitled ‘A Peaceable and Orderly County?’ which is organised by the Carlow Historical and Archaeological Society and takes place at the Seven Oaks Hotel on Wednesday 20 October at 8pm.

RIC served as Ireland’s law-enforcement agency throughout much of the nineteenth and early twentieth centuries. The local constables’ civil and legal duties made them a consistent and controversial feature of Irish life, simultaneously a pillar of the local community and a manifestation of colonial rule. Perhaps the historical event in which the organization features most prominently is the War of Independence. There has been a narrative that the RIC embraced a quasi military role bend on suppressing dissent by violent means. Mr Kane suggests while there is an essential truth to this but it “has been cultivated in binary broad-strokes over the course of a century – widely at the expense of regional nuance and critical consideration.”

RIC as result has been defined by what its actions in counties where rebels were most active like Cork, Tipperary and Dublin.

Mr Kane will look at Carlow and how it saw considerably less conflict.

Ambushes were relatively infrequent and often abortive, while Crown responses were uncharacteristically well-coordinated and occasionally successful, as illustrated by the Ballymurphy ambush of 1921. RIC barrack burnings meanwhile – although common – were confined to rural outposts, and only after they were evacuated in March/April of 1920 to consolidate the region’s urban centers.

Mr Kane will look at how Carlow’s revolutionary experience was distinct from that of other counties.

Filed under: CHAS, history, things to do

History and culture talk on the Blackstairs Mountains