BY the end of the year the Under 20 Hurling Championship will be feted as the stand out competition of the season in Carlow. It might be a bit early to make such a prediction but such was the quality and the excitement generated it would take something extraordinary to top this championship.

It was badly needed. The great Carlow teams which won the Christy Ring and Joe McDonagh Cups in Croke Park is not now as strong as they used to be. Hurling in the county is in a period of transition. The county has lost its place in the NHL 1B and the Liam McCarthy Cup. It was excruciatingly disappointing to see Carlow slide away from the top table but the evidence suggests those great days could return. It may take a number of years but judging by what came out of the Under 20 Championship the omens are good.

The County Board deserve great credit for coming up with a new championship format. As distinct from a knock-out competition the round robin system drew the best out of the players. Mount Leinster Rangers, Naomh Eoin and Bagenalstown Gaels emerged from Division 1. They were joined by St Mullins who won all their games in Division 2.

Just to recap. Bagenalstown Gaels beat Mount Leinster Rangers in the final by 3-12 to 0-19. In the Shield Final Naomh Bríd overcame Carlow Town (2-18 to 4-10) who had trailed by twelve points at half-time. Another minute. A flick of a hurl or a deflection of any sorts and the result could have been reversed.

There was drama all through. Particularly in the Division 1 group games. It took a Donagh Murphy point to save Rangers who drew with Bagenalstown Gaels in the opening round. Ballinkillen didn’t get too much luck in the group games losing to Naomh Eoin and Mount Leinster Rangers who were flattered by their respective five and eleven point victories. They had to beat Bagenalstown Gaels in McGrath Park if they were to qualify for the semi-finals. The home side always looked as if they were going to win but Ballinkillen hit them with two late goals. Another minute and who knows what might have happened.

Both semi-finals were as close as the score-lines suggested. Bagenalstown Gaels beat Naomh Eoin by a point (0-14 to 0-13) and Rangers just about saw off the challenge of St Mullins (0-16 to 1-10). This wasn’t the best Rangers side ever to represent the club but the character they showed all the way through the group games and in the semi-final (against St Mullins) and final was huge. They will accomplish plenty going forward. The eventual winners, Bagenalstown Gaels, could so easily have finished fourth in the group but they survived and ended up as worthy champions. In actual fact if that entire group games were to be replayed there could so very well be different champions. It was inches which mattered all through. That is not to suggest Bagenalstown Gaels were not worthy winners. Far from it. When the going got tough, the future champions looked their respective opponents straight between the eyes and answered the hard questions.

Now that it is over it begs the question. What is going to happen to these players?

This year Carlow minors and under 20s were beaten by Kildare in their respective championships. There was a time that any Carlow hurling team would have been expected to beat any Kildare hurling team. Not anymore. Carlow did overcome the Lily Whites in the Joe McDonagh Cup in Newbridge but it was tight. At the moment, particularly at underage, Carlow looks to be down the pecking order in Leinster with Westmeath and Kildare a few strokes of a hurley ahead of them.

In the Leinster under 20 championships Kildare edged Carlow 1-23 to 3-16 and the Kildare minors ended the Barrowsiders provincial interest by 2-23 to 1-9. Both these games were played at Netwatch Cullen Park. It was a worrying two evenings. Apart from winning the games it was clear the Kildare minors and under 20s had superior skill levels while they looked to be years of Carlow ahead when it came to strength and conditioning. This was not lost on the Games Development Officers in the county and Sean Gannon, the lead GDA in Carlow, has revealed steps are being taken to narrow the gap in this area. That is welcome news.

In the meantime here is the Team of the Under 20 Hurling Championship. It is not an exact science. No doubt heads will be scratched as to why certain players were included and others were not.

Ciaran Abbey (Naomh Eoin): The Myshall goalkeeper is one of those players who, no matter where he is placed, he produces. He scored 1-7 in a group game against Ballinkillen but was back in the goal for the semi-final where he scored two points and kept a clean sheet.

Eamonn Normanly (Ballinkillen): This young hurler who has broken into the senior squad is consistent, tenacious and methodical and is surely set for a long career in the Ballinkillen senior jersey.

Michael Joyce (Mount Leinster Rangers): It looks as if this young man is set to follow in a long line of great Rangers defenders where he has been a regular in the number 3 jersey throughout the championship. He is tough, a good decision maker and a good ball striker.

Darragh Nolan (Bagenalstown Gaels): He has already an established senior player and is equally comfortable both in the full and half-back lines. He has the ability to mark tightly but can get forward to add something else to the attack.

Mark Foley (Ballinkillen): He is a regular started at midfield for his club throughout the championship but his work-rate sees him dropping back in defence or moving forward to pick off scores. For some observers he was an automatic selection here. 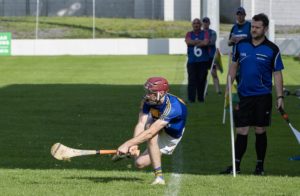 Eoin Hosey (Naomh Eoin): At centre-back he is the back-bone of the Naomh Eoin 20s while he has cemented his place on the senior Naomh Eoin team. He also had several outings with the Carlow senior hurlers.

Niall Bolger (Bagenalstown): This player brings strength and no shortage of skill to the full-back line where his work can turn defence into attack in a matter of moments. He played for the Carlow under 20s this season.

Bagenalstown Gaels’ Niall Bolger (left) was in top form at the heart of his team’s defence
Photo: michaelorourkephotography.ie

Fiachra Fitzpatrick (Mount Leinster Rangers): The Rangers man is big, strong and a very intelligent player. He has broken into the first team and is set for a long and successful career with club and county. 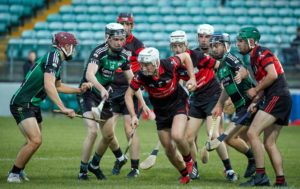 Jack McCullagh (Bagenalstown Gaels): Here is a quality midfielder who has a huge work rate and is quite adept at picking off vital scores at vital times. He played five times for the Carlow senior hurlers this year and at midfield for the under 20s. 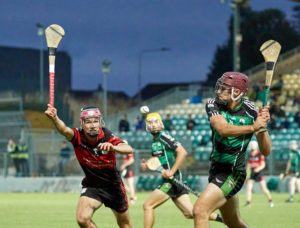 Jack McCullagh starred at the heart of the Bagenalstown Gaels midfield
Photo: michaelorourkephotography.ie

Fiach O’Toole (Naomh Bríd): He lined out for Carlow under 20s at corner forward where he scored 1-1 against Kildare while he was outstanding for his club where he was a regular scorer from his centre half-forward position.

Jack Treacy (Ballinkillen): He is a free-scoring player who picked off 1-7 against Rangers in the group game and went on to fire over 0-5 when Ballinkillen came ever so near in their last group game. He is an inspirational forward who leads by example. 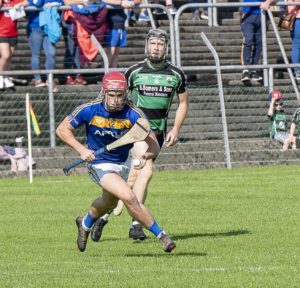 Jake Doyle (Bagenalstown Gaels): He scored a phenomenal 2-11 in the last group game against Ballinkillen. Without him the Gaels could very well have made their exit. He went on to score 0-4 and 0-3 respectively in the semi-final and final.

Kealan Guidera (Bagenalstown Gaels): He is the kind of player who could well be described as the silent killer. He glides around the pitch seemingly unfussed but at the end he has contributed on the scoreboard or set up those around him for crucial scores. His 0-6 in the semi-final was immense.

Richie Whelan (Bagenalstown Gaels): As the championship progressed this player got stronger and stronger. As a captain he led the side well, contributing on the scoreboard and his general play both in attack and dropping back had a major say in the destination of the championship. 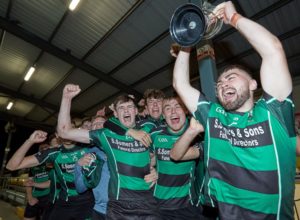 Richie Whelan captained Bagenalstown Gaels to a wonderful success in the U20 Hurling Championship but Carlow GAA must strike to make the most of the potential coming through the ranks
Photo: michaelorourkephotography.ie

Conor Kehoe (St Mullins): He was the rock on which St Mullins based their bid for a place in the county final. The free scoring forward, who has broken into the club’s senior team, scored 0-8 in the semi-final against Rangers who just got themselves over the line despite Kehoe’s considerable offering. 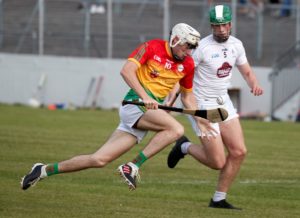 Such was the talent in the current group of players it was almost embarrassing not to be able to include more players in a team where the limit is fifteen.

Donagh Murphy scored 0-10 in the county final. Evan Kealy and Sean Joyce for Rangers had huge games that night. Ciaran Kavanagh, who has featured on the Ranger’s senior team, would surely have been included here but injury has been his companion this season.

The same for Dean Slye of Naomh Eoin. His club colleagues, Michael Nolan and Ger Kavanagh were excellent all through.

Niall Hickey of Ballinkillen isn’t one to get flustered or get himself involved in the dark arts. He lets his hurling on the pitch talk for him. Also for club and county, Conor Treacy, whether it is in goal or at full-forward, the big man delivers.

Dan Brennan, Dan Culleton, Adam Maher and Kyle Nolan back-boned the Carlow Town effort. All but one of the 26 plus squad is available next year.

At the moment, you could argue the future of Carlow hurling lies with the present senior group and the current crop of hurlers aged 18-22. At the age that they are at they have gone outside the underage development squad net. Many of them will be back in college which makes it harder for them to train and develop themselves with Carlow.

Yet there is almost an obligation on the county to keep these young men together as much as possible. There is no silver bullet solution. Would it be possible to ensure all the resources that can possibly be mustered be put in place so as to ensure the county gets the maximum out of these young men? These talented lads also need to be advised and helped so that they can fulfil their own ambitions and, critically, get the maximum enjoyment from the sport they so obviously love.