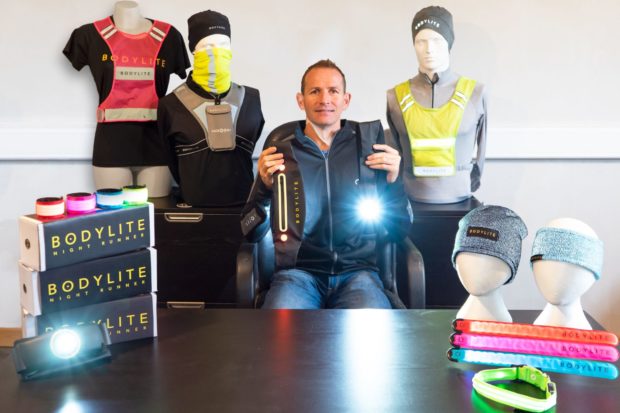 A CARLOW company has been playing its part creating a safer environment for runners and walkers at night with an innovative LED running belt.

As the dark evenings close in, the belt allows users to safely walk or run at night and be visible for up to 500 metres in front of an oncoming vehicle.

Bodylite is the brainchild of Padraic George, who is the managing director of Cheetah Electronics. A keen runner, he says that he ran into a problem which most people who run or walk in rural Ireland will encounter.

“Just because of the nature of my work I have to exercise either extremely early in the morning or late at night. A lot of my training would have been done running along back roads in a very rural part of Carlow, which had little or no street lighting. I have used both my phone and hand torch in the past to be visible to traffic, but if you do it often enough, you’ll realise that it’s not efficient, and really, from a safety perspective, it’s not ideal. So I just felt there had to be a solution, and given my background in electrical engineering and owning my own electronics company, I felt I had the tools to design something that might be helpful to people in a similar situation,” said Padraic.

Concepts, creating prototypes, testing and branding and all the little steps in between took three years before the Bodylite brand came to life in 2016.

The Night Runner LED belt, which was designed in collaboration with DesignCore at IT Carlow, has proved to be a huge success. It has a number of unique design and functionality features which, the company says, sets it apart from other competitors in the market.

The Carlow company currently employs up to 20 full and part-time staff across Bodylite and Cheetah Electronics, but Padraic stated that further expansion could be on the cards in 2022.

He said: “If this winter season goes well for us, we plan on expanding our current safetywear product range and will slowly begin to test activewear clothing, designed for runners and walkers in 2022. However, these would not be full-time positions until the brand steps out of our current seasonal product range. When Bodylite gets busier in the winter months, we have previously pulled employees from Cheetah when needed, like last year, when we had additional staff working throughout the Christmas period.”

Padraic and Cheetah Electronics have once again teamed up with DesignCore and are currently in the process of developing prototypes for another project which, they say, remains under wraps for now.

Carlow boutique is offering a personal touch in a digital world