COMETH the big moments, you can always rely on Kylie Murphy to step up and lead from the front. She did just that on Saturday night when she scored twice against Peamount United in the Evoke.ie FAI Women’s Cup Semi-Final to set up a cup final date with Shelboune on 21 November in Tallaght Stadium. The Graiguecullen native scored the opening goal of the match after 35 minutes when she headed in Ciara Rossiter’s corner off the crossbar and into the back of the net. For so long it looked as if that would be the winning goal. However, deep into injury time, they conceded to force extra time. But again, the captain stepped up, Ellen Molloy making good ground in the middle of the park, squared the ball off to her left with Murphy waiting and she made no mistake in firing it into the far side of the net. That proved to be the winning goal as they won 3-1 to advance. 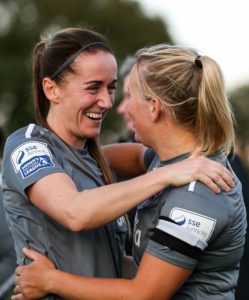 Murphy was a very happy lady when she spoke to The Nationalist after the game. “Extremely happy. Delighted so I am, I never mind not scoring as long as we get the win. A day out at a cup final is really nice, it’s really nice to have something to look forward to. The league is gone and a loss tonight would have made for an awful end to the season, you’d have had three league games to play out and not really need much. It’s great now though that those league games now will be very important in the run up to the final. It’s great, Peamount knocked us out last year at the semi-finals and it’s heartbreaking. It’s fantastic, we have a bit of a break to get a few tired bodies rested and a few injuries looked at, we have about five weeks so we have a bit of time to get ourselves right and hopefully we’ll be flying by 21 November.”

She added that it was a killer to concede so late. “It was like a sucker punch, I won’t lie. We were pressing so high for such a large part of the game which isn’t easy to do. We were literally after throwing everything into the 90 minutes. To score so late and the type of goal it was, it was hard to take. But the game wasn’t lost so we had the time. It is hard, but it’s all about mentality. We have a lot of experience on that side and they know what it’s like, with Wexford we’re never gone until we’re dead and buried, we never give up. It’s just a case of taking it on the chin and getting ready for extra time. We had the legs, we have a good experience of youth and experience, we’re a very fit side. And thankfully we scored two goals in the first half of extra time which killed them off. We were the better side and played the better football and if we’d been more clinical, we could have scored three or four. I’m always saying to the girls that when the chances come, take them. I got into some good positions but the girls put it on a plate for me, they were just dying to be hit. With Ellen’s one, she put it right into my path, I didn’t even need to take a touch. When you have players like that, it’s huge because they just know where to put the ball and a lot of credit has to go to them.”

She says that there’s a hunger there to succeed despite being considered underdogs. “That never leaves. We’ve not beaten Peamount yet, we’ve not been hammered either. The first league match I missed the penalty and they went down the pitch and scored a freak goal. And then the following two games were draws and I think the second one up there we should have nicked it. We’ll always back ourselves [against Shels in the final], we’ll definitely be going in as underdogs though. There’s no point playing if you don’t believe you can win though. A lot of work will have to be put in, they have a lot of technical players and are superb on the ball. It’s all Shels have as well because it looks like Peamount are going to win the league easily. I’d definitely back us but I’d imagine nobody else will. I’d say we’re going in as underdogs but that’s ok too. We love it because it’s like that bit of extra motivation. I don’t think people actually realise how good a team we are and when we hit form we’re very good. But there’s no pressure on us then, nobody expects anything from us but there’s never any doubt in that dressing room that we can perform.”

Whilst Murphy will take all the plaudits for her two goals, at the other end of the pitch Lauren Dwyer was fantastic, a rock at the back. She made several key blocks and interventions, coming out of nowhere at times to keep her side in the match. Murphy saved a special word for her fellow Carlow woman. “Lauren is just excellent, without a shadow of a doubt she’s the best defender in that whole league, she just shines. She’s been out for the last couple of weeks so only started training this week and we weren’t sure if she was going to play or not. But the reality is that Lauren can possibly be the winning and losing of the game. She’s so important to us and when Lauren is on it, there is no getting past her.”