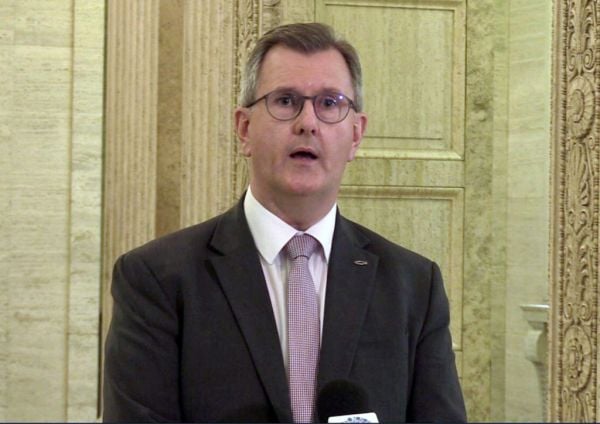 Democratic Unionist Party leader Sir Jeffrey Donaldson has described new proposals from the EU on the Northern Ireland Protocol as a “starting point”.

The measures are to bring about an 80 per cent reduction in checks envisaged for retail agri-food products arriving in the region from Great Britain.

However, Mr Donaldson said that on first inspection they would appear to “fall far short of the fundamental change needed”.

We propose a type of “express lane”, facilitating the movement of goods from GB to NI:
🔹customs formalities for more businesses and goods cut in half;
🔹simplified certification and an 80% reduction of the checks for more retail goods for NI consumers.https://t.co/k8gvfKDwO7 pic.twitter.com/AcQwWAZBsm

Meanwhile, Sinn Féin vice president Michelle O’Neill said her party has tabled a recall of the Assembly to “reiterate its support” for the protocol.

She emphasised it is backed by the “majority of political parties and the majority of MLAs” in the Stormont Assembly, adding the recall will allow MLAs to demonstrate their support for it.

It is understood that if the attempt to recall the Assembly is successful, it will sit on Friday.

He said his party will take time to study the detail and urged that future discussions are “not a wasted opportunity”.

“The forthcoming negotiations between the UK Government and the European Union present an opportunity to replace the protocol with new arrangements that deal with the present foundational weaknesses, namely that we have a trade border within the United Kingdom flowing from the reality that Northern Ireland follows different laws for goods than the rest of the United Kingdom,” he said.

“These proposals clearly fall a long way short of being the basis of a sustainable solution and are presented within the framework of a protocol that has failed.

“The proposals in the Government command paper, in our view, are the best direction of travel to start creating sustainable arrangements for Northern Ireland.

“We have a window of opportunity to get this right.

“The prize for doing so will be great for both sides but most of all for the people of Northern Ireland who can break free from the protocol infecting day-to-day decisions.”

Ms O’Neill challenged the DUP and UK Government to work with the EU on what she described as “far-reaching” proposals.

“I think that demonstrates both in word and deed that the EU side are living up to their commitments that they made to both business and civic leaders as well as political leaders,” she said.

“It’s a good mark of progress, however it’s up to others now as to whether or not they engage with this process.

“I will meet with Maros Sefcovic tomorrow.

“We will discuss the proposals in more detail but I think this represents progress and I think very much fulfils the commitments that have been made within the protocol to protect the all-island economy, to ensure no hard border on this island and to make sure that we protect the Good Friday Agreement.”

Ms O’Neill was asked by reporters at Stormont whether the proposals from the EU represent a victory for the DUP.

“Brexit is the problem and the protocol is a solution, the protocol remains today, we have always said there needed to be flexibility inbuilt into that protocol to make it work, that was what Maros Sefcovic committed to when he met business and civic leaders here back in September and he’s true to his word today, he has delivered upon what he listened to and I think that’s crucially important,” she said.

SDLP leader Colum Eastwood said the EU proposals represent a fair accommodation and has urged political leaders to embrace them.

“The proposals presented by the European Commission today are significant, they go further than many expected and clearly demonstrate that European leaders are stretching themselves in the interests of people and businesses in Northern Ireland,” he said.

“I would encourage political leaders, and particularly the leaders of unionism, to reflect on the very serious efforts made by the European Commission to ease the challenges with trade flows between Northern Ireland and Britain as well as addressing their concerns about democratic deficits.”

Ulster Unionist leader Doug Beattie said the proposals are a “step forward”, but warned there “remains a long way to go”.

“The EU proposals can only be a starting point and in that we accept good faith,” he said.

“The UK Government has provided a way forward in its Command Paper and that must be a central part of any future and substantive negotiations from this point onwards.”

Alliance MP Stephen Farry urged that the opportunity presented in the proposals is not squandered.

“We welcome these proposals and look forward to engaging on the details.

“We hope they can form the basis for agreement between the UK and EU to address the practical issues around the protocol in a pragmatic way,” he said.

“It would be an act of supreme folly to squander this chance to move on and indeed to impose even more delusional red lines.”

“The EU’s latest proposals do nothing to counter the all important constitutional dislocation.

“They retain us in a foreign single market for goods, under a foreign customs code and VAT regime, ruled by foreign laws and adjudicated upon by a foreign court.

“None of that would change under the EU’s proposals.

“Thus, they have not addressed the critical issue,” he said.

“GB would continue to be decreed a ‘third country’ vis-a-vis Northern Ireland’s trade.

“That can never be acceptable, because it defies the constitutional integrity of our nation.

“Sovereignty is the crunch issue.