FORMER Tullow rugby player and winger, Cillian Redmond, who has been given a one-year contract by London Irish, has said he dreamt and often joked about the possibility of playing professional rugby but never thought that it was likely to happen.

He had been playing rugby for Lansdowne in the All-Ireland league but on the recommendation of Tullow rugby legend, Sean O’Brien, London Irish brought him over on a trial period.

On 13 September Cillian played part of a practice match for London Irish against Connacht in Galway. He got home for two days but was back in London on the Monday. While it was acknowledged he had done well Cillian had to keep his head down, work hard and hope that the club would make him an offer. It was an anxious time but some of the signals emanating from the coaching staff were positive.

“I had a chat with Les Kiss about how I was going. He told me he was happy to keep me if everyone was on the same page. From that, I didn’t want to get my hopes up but I had a gut feeling that I had done enough,” said Redmond. 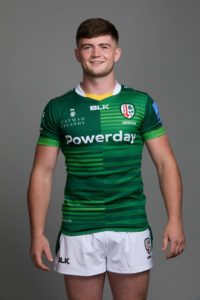 The Kildavin-Clonegal footballer was approaching the final week of his trial when he was called to the office by Declan Kidney, who is now Director of Rugby in the club. The former Irish coach offered Cillian a contract for the year but only if the club wasn’t going to break the budget which had been set.

“Luckily I got the word last week and so basically after training for the last six weeks a contract was finalised last week,” revealed Cillian.

He was in and in the modern world it was via social media the news was broadcast.

“London Irish announced it on Instagram on Wednesday but the first player to come up to me was Curtis Ronan an Australian who plays 13. He is someone who I would be fairly friendly with.

“He gave me a hug and said it was great to have me around. It is going to be a good year,” said Redmond.

“He was as chuffed for me as I was for myself. He has put in as much work with me as I have put in myself. Who ever thought there would be two Tullow lads together in London Irish?” asked Cillian.

Ciara Cooney is another former Tullow rugby player who is playing professional rugby with Wasps. She heard Cillian had been offered the contract.

“We would have been in contact with her. It was great to talk to her. She was talking to Sean and was as chuffed for me as well,” admitted Cillian.

The new London-Irish recruit recalls when life had taken a turn in the wrong direction for him when he contacted Hodgkin’s Lymphoma. It is  a cancer of the lymphatic system which is part of the immune system. It can affect people of any age but is most common in people between 20 and 40 years of age.

“I was selected for Leinster in 2017 in May on the Tuesday. Then on Friday I started Chemo for Hodgkin’s Lymphoma. I was out for five months with that and got back playing rugby for Tullow in December. I played Towns Cup in January 2018.”

Talk about life being fickle. The County Carlow sportsman understands this only too well now.

“You never know what is going to come around the corner, do you? I was down in the dumps one minute but now I feel top of the world.”

At the moment life is good. All sorts of thoughts have gone and are still going through his head as the days progress.

“Now I am playing with the likes of Sean and Paddy Jackson. That is something I always dreamed of. Not that long ago Sean was presenting medals and awards to us in Tullow,” says Cillian.

Before his trial in London Irish he was studying in DIT. That has been put on hold. The college are accommodating him. He is going to study in London where the two courses are closely linked.

“I am going to study modules over here for construction management. If I have to return to Ireland they will allow me to continue my course without those modules.”

Family are never that far away for him either. Not too long ago he was a groomsman at the wedding of his first cousin, Daniel St Ledger, who needs no introduction to Carlow GAA.

Not only he but his parents, Bernie and Ciarán, were hugely emotional when the news of the contract came through.

“My parents didn’t realise until I found out. I didn’t want to build up their hopes. Once I found out I rang them. I think my mother started crying. My father was laughing with joy.”

His links with rugby clubs Tullow and Lansdowne remain strong.

“I would love to mention Tullow Rugby Club. I started playing with them. Later on, I set my own goals and they never had any problem when I came back training on the pitch. When I moved to Dublin they were very accommodating

“Lansdowne are also top-notch. They are all on to me. I couldn’t have asked for more.”

Now he has to keep fit, avoid injury and take the chances which come his way.

Tricky ties in store for Carlow teams in Towns Cup